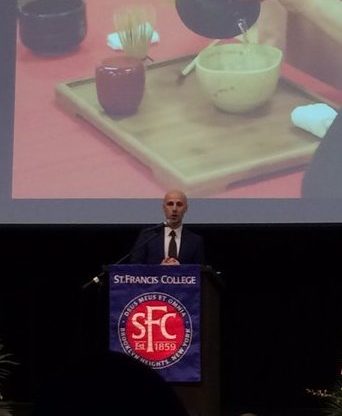 The Boston-born and Yale-educated Adamson was appointed Director of MAD in 2013 after an 8-year tenure as the director of the Victoria and Albert Museum of London. Adamson was an unconventional choice for the position because of his vocal criticism of the museum after it moved to a new building in Columbus Circle, and changed its name from the American Craft Museum to MAD.

As a self-defined “craft specialist,” Adamson seemed offended by the name change. “The new name seemed to have been chosen mainly for its vagueness,” he told the New York Times, “All the arts, and design too? Isn’t design one of the arts anyway?” he said. “Obviously, the real objective, beyond erasing the word ‘craft,’ was to eliminate all the baggage the term brought along with it.”

His appointment to director, though, has proved immensely beneficial to the redesigning of the museum, and under his direction, annual attendance has risen from around 40,000 to over 500,000.

Adamson began his lecture by acquainting the audience with the man who inspired him: his grandfather. Born in a small town in Kansas during the Depression, his grandfather learned quickly how to do most things with his hands: plow a field, take apart a tractor and reassemble it, and even make ice cream from scratch. “He had an easy relationship with material objects and tools and the way things are made,” Adamson said.

With his natural understanding of the physical world around him, Adamson’s beloved grandfather eventually became a prominent aviation engineer and artisanal woodcarver, and Adamson joked that he used to carry around a business card that said, “Arthur P. Adamson: Woodcarving & Jet Engines, Made to Order.”

Armed with the childhood scenes of his grandfather’s ingenuity, Adamson set out into the world of craftsmanship and design. He mentioned a poignant moment in his education when he knew exactly what he wanted to do with his life. Pulled backstage at an exhibit by one of his college professors, he was handed a thousand-year-old piece of ancient Chinese pottery. He turned the exquisite piece over, and saw the fingerprints of the artisan who made it. Instantly connected to a millennium of human history, he knew studying materiality and the history of objects in design was his passion.

“I could feel the passage of his hands through the clay as he was making it,” Adamson eloquently stated.

Adamson went on to speak about the poeticism of Japanese tea ceremonies, and how the bowls used for them throughout the centuries have a certain songlike evocation of the worlds they come from. They are orchestral in their beauty, he noted, saying, “They are a perfect harmony of various elements that appeal to all five senses.” And the materiality of these ceremonies—embodied by the bowls that are used for them—reflect so much more than the simple ceramic visual that most museum-goers see.

“Bowls are valued for their individual character,” Adamson added, “Like individual people. […] All of that happens in the materiality of the object.”

Adamson then interestingly connected the sacred tradition of Japanese tea ceremonies to more recent pop culture references, but noted that craftsmanship and materiality are the arc between the seemingly incongruent subjects.

He first used the example of the “Hair Battle Spectacular,” a reality TV show where hairstylists compete to make the most inventive and outrageous hairstyle. “The spectacle of skill” is invaluable to a show like that, Adamson noted, “And is fundamental to a museum like ours.”

Arby’s ads for “Artisanal Melts,” New Balance’s slogan “Craftsmanship Redefined,” and Jeep’s tagline “The Things We Make, Make Us” are other modern examples of how our society values craftsmanship in an increasingly technological world, and they all quietly echo Adamson’s sentiment about the personal investment we all should have about the story behind the products we consume.

Next he spoke about a powerful and contentious subject on the minds of many in the design world today: the politics of materiality that we as global citizens are confronted with each day.

The 2010 FIFA World Cup, Adamson contends, is a perfect example of this phenomenon. The event’s official soccer ball—called the “Jabulani Football”—takes its name from a Zulu word meaning “rejoice.” Ironically, the process and materials used in the manufacturing of the balls proved an ugly issue after it was uncovered that they were being made in Pakistan by slave laborers. Production then moved to China in order to deflect any criticism of FIFA about the Pakistani working conditions.

So a simple ball—one that was supposed to symbolize the unity of South Africa—actually has intense and unsavory global implications. Its textiles and mix of hand and machine production allow the material object itself to tell us a story about the importance of craftsmanship and the materials that surround us.

“People in the museum field should be fighting for transparency,” Adamson said. “We should know how the things in the world around us are being made. […] Every material is specific. Every material has a history.”

The final example Adamson offered was a conceptual sculpture that artist Cara Walker constructed in the abandoned Williamsburg Domino’s Sugar Factory. The sculpture, titled “Marvelous Sugar Baby,” was shaped like the Sphinx but with a stereotypical representation of a black female slave’s head on top. Composed of polystyrene blocks and coated completely in sugar, the piece’s material elements sought to ask the viewer to reanalyze what something so simple—the sugar sitting on your kitchen table or stirred into your coffee—meant to the lives of the slaves who produced it. Walker used the sculpture’s material composition to express that uncomfortable and oft-forgotten reality.

Adamson’s lecture was imbued with an analytical esotericism that allowed attendees to see the material realm—of art, of textiles, of composition—in a different light. There is so much to know in the world around us, and Adamson reminded listeners that that the material world is full of answers, if only we bother to ask the right questions.