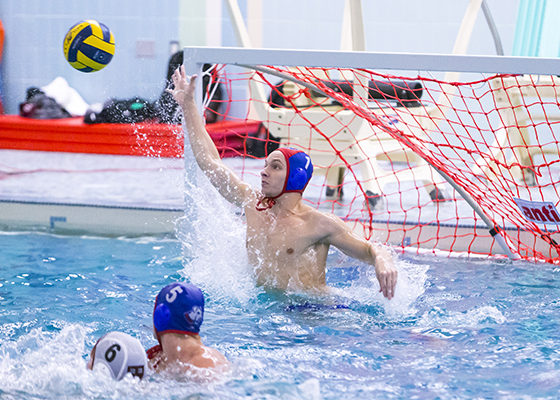 For someone who never planned on pursuing a collegiate career in water polo, St. Francis Brooklyn Terriers junior goalie Zack Cleveland has made quite an impact in the water.

SFC vs Harvard UniversityHe has only been playing the sport for four years, but his strong blocking shows how talented he is for a novice.

Cleveland grew up traveling from Iceland to various states throughout the United States before settling down in the small town of Plano, Texas. Growing up, he participated in countless sports such as basketball and soccer, but had a love for swimming. Throughout high school, Cleveland was a swimmer and he knew it was the sport he was passionate about.

“In my senior year, I could either do off season swimming or play water polo, so I chose to try water polo,” Cleveland told SFC Today. “I never thought anything would come of it, I just wanted to try something new.”

During the summer in Dallas, Cleveland participated in club water polo and loved being part of a team with such chemistry. He also liked the competitive aspect of the sport, which was much different than swimming. Although he was attending community college in Texas, scouts from colleges all over the country were looking to recruit the one-year rookie.

After connecting with SFC’s water polo coach through a teammate, Cleveland became interested in the thought of attending a school in New York, which was more than 1,000 miles from his hometown.

“I never planned on playing water polo in college; I never thought I would come all the way out to New York to be part of this team,” he said. “No one ever gave me advice on what to do; people just told me that I was good at the sport, and I wanted to see how far I could take it.”

Just like in any sport, there are positive and negative aspects of being a water polo player. He loves having a competitive team and enjoys the feeling of being an asset by being goalie.

“I enjoy having the team rely on me. I like that they know that if the other team has the ball and they are going to try and score, I’ll give it my all to block the shot. We all have confidence in one another in the water. As a goalie, you have less room for mistake; there’s a lot of pressure on you”

Being an athlete in general requires a lot of training and practice, but for water polo, the routine is vigorous and practically non-stop. Having to be able to have the strength and stamina to tread water throughout an entire game would require a great amount of training from any athlete who wants to thrive.

“One of my favorite things about being a part of the water polo team is the fact that I am constantly being pushed to stay in shape,” the goalie told SFC Today. “When you’re in the cold water for a long time, your body requires you to keep moving to stay warm and tread water.”

Whether it is practicing, lifting weights, developing game strategies or swimming, there is always something going on from when the preseason begins in August to the conclusion of the season in early December. The Terriers face multiple teams from the CWPA, which include colleges such as Brown, Harvard and MIT.

“During the season, we train 25 hours a week,” he said. “From Tuesday to Friday we have practice three hours a day, in addition to weights every other day. We also have tournaments every weekend during the season but the team and I enjoy traveling and versing opponents.”

Cleveland, along with the other members of the water polo team, has had a copious amount of accomplishments throughout his three years here. The team has made it to the Eastern Conference Playoffs all three years of his career.

“During one game, the score was tied and we ended up going into overtime. Since no one scored in overtime, we were forced into a shootout,” Cleveland told SFC Today. “During a shootout, a goalie has to block five shots thrown by the opponent. The other goalie wasn’t able to block any so I knew that if I at least blocked one shot, that we would win. This was definitely one of those moments where I felt the pressure, but I was able to succeed, and we ended up winning the game.”

Being a part of such a diverse team is something Cleveland makes sure he takes advantage of since growing up in a small town in Texas limited his access to meet people from around the world. Playing for a team that consists of Hungarians and Serbians gives him the opportunity to learn about different cultures, backgrounds and minds.

“I am appreciative of the opportunities water polo has provided me,” Cleveland said. “The people I’ve met and the experiences I’ve had are unique. St. Francis and New York City are filled with memories that will stay with me forever.”

DON’T TIRE YOURSELF OUT
CEDENO BRINGS A SLEW OF EXPERIENCES TO ST. FRANCIS