Inside the True Crime Interviews of TV One’s “Fatal Attraction” 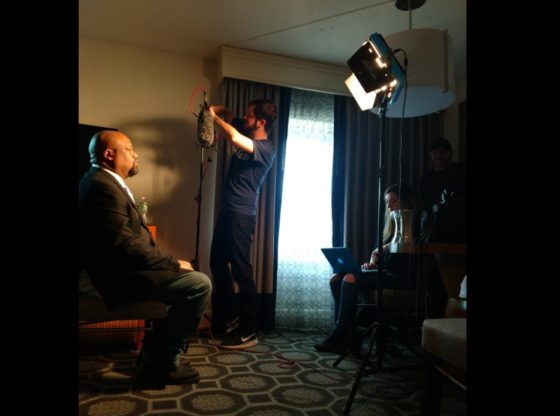 Earlier in the week of February 17th 2018, the Jupiter crew originally filmed dramatized reenactments for their segment about the accounts of a real-life love-triangle domestic dispute that ended in murder. On Saturday, February 24th 2018, Jupiter chose to interview retired NYPD Sergeant Jason Hanna (in far left of picture above), asking him to respond to various behind-the-scenes questions about the solving of the crime for the show at the Huntington Hilton Inn in Long Island.

Hanna claimed that, although “friends and family” are questioned by authorities when solving a murder, Police tend to “look at spouses first” when searching for primary suspects. Hanna also described the events of the murder in detail and said that, despite its being the site of the crime, Huntington is a “relatively normal suburb” mostly made up “of working class people.”

Among the crew present were Director of Photography Keith Byrd (in far right of picture), Audio Technician Marlow Patterson (with boom mic in center of picture), and Producer Brooke Aycock (with laptop, second from right in picture). Keith Byrd set up the scene and managed the visual presentation of the interview through digital SSD cards in the camera while Marlow Patterson supervised the audio being recorded on the set and made sure that outside noise was not captured on interviewee Hanna’s mic.

Brooke Aycock stated that her job as a Producer/Interviewer is to schedule the show’s interviews, edit scripts, book hotels, secure locations, and “hold everything together.” She continued that “the interview is the small part of a larger picture” within the show’s development.

Though the interview mainly focused on a specific event for the show, the topics discussed branched out into the problems and solutions found within some everyday urban life. When asked nearing the end of the interview about the best way for common folk to prevent future domestic disputes and squabbles, Hanna simply replied: “don’t shoot people.”