IN THE LINE OF FIRE, YOU GOTTA HAVE FAITH

Home /Sports/IN THE LINE OF FIRE, YOU GOTTA HAVE FAITH 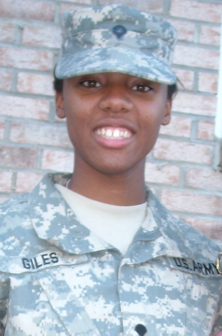 When she was under enemy fire in Iraq, one thought kept Gina Giles going — the prospect of receiving an e-mail from St Francis College asking her “what number do you want on the back of your volleyball jersey?”

Her captivating story in Iraq and as an active member in the U.S. National Guard firmly puts things into perspective for all of us.

Giles, who entered active duty after leaving Scottsdale Community College in Arizona, knew full well of her volleyball aspirations — playing at a division one program.

The time in Iraq was tough even for Gina, who sometimes asked herself: “What did I get myself into.”

She knew volleyball was something that would give her the incentive to get her past the danger and the drudgery of the Iraq tour.

The dream of playing for a top tier volleyball program and hopes of even going professional kept her going.

Giles made the decision to apply to St Francis while on tour — and being accepted helped Gina to make it through -– keeping her in tact mentally, spiritually and emotionally.

“As a child, coaches told me I could never play division one volleyball,” said Gina. She proved them wrong.

Her leadership abilities clearly enhance her play on the volleyball court.

Giles joined the U.S. National Guard in 2005 at age 19 and reality soon began to take hold. For one thing, her mother disapproved of the move.

Giles explained that being able to serve her country in a stage such as Iraq and developing a new perspective was “an understatement, it was intense, but I got a direction. I grew up a lot. I was a member of a team and became a leader.”

With her whole life hopefully ahead of her, she had to cope in a daily war situation with no family around her. She was driven by her patriotism.

“9/11 hit me hard. Much of my family served in the armed forces. I have to do my part. I have to represent the veterans and the people who lost their lives. I felt an obligation.”

Gina doesn’t call herself a hero.

“I don’t want to take credit. It was the call of duty to serve my country. I did my job.”

Gina’s 13-month tour of duty gave her plenty of time to contemplate whether she would get out of there alive.

“I was scared, but I have no regrets. My contract is up in 2011. I’m not sure I want to serve in Afghanistan.”

Gina also found another gift to take home. That gift was God. Gina got the chance to be baptized.

“I found God even more; it helped me be sustained to another level.”

And with the perspective that she has gained from this most intense of experiences, Gina has some advice for her fellow students: live every moment.