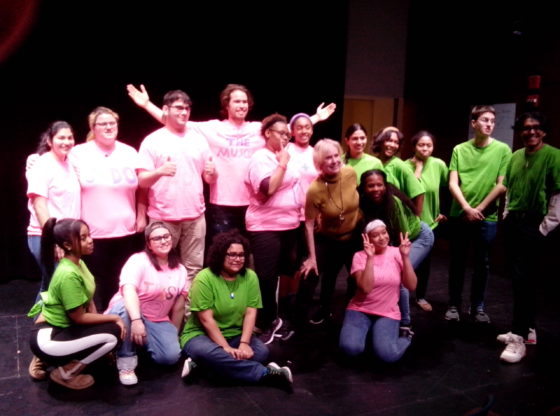 This year’s improv boot camp show was dramatic, yet sassy with new freshmen and big performances.

Despite the class differences, all students had a great time with the same competition energy for team green and pink.

This being my first time in attendance, I can say that it was definitely inspiring for any student who wants to get into acting as a whole.

Every student gave their hardest effort and Director, Kathryn Grant was a coaching guide to every student who needed to push a little harder.

She would shout, “Use your voice!” or “Move the action forward!” in a direct and engaging manner. Something I never before on a live stage.

Two of my favorite highlights were Nyasia Morant and Senior, Taylor Norde’s energy during the conducted story time.

Both students seem to get lost in their character whether they were a zealous snail eater or a hyper soccer mom cheering their child on.

The event came to a great climax with the bonus scene demonstration.

I found it impressive how every student could work together to create a restaurant scene with a struggling couple concept.

“I thought it was a job well done. Half of the people who performed in this piece are people that are very close to me…I must congratulate each and everyone…” Kowalik said.

This just goes to show how fast learning can create a bond.

Next year I hope to either see the show again or maybe participate myself. Kowalik at least is eager to in his senior year.

“For those that want to know more about performing on stage to come out of their inner shell and gain some experience; next spring is the time to do it and make it shine!” He said.

Just as Tina Fey said on the back of their flyer, “Say yes and you’ll figure it out afterward.”