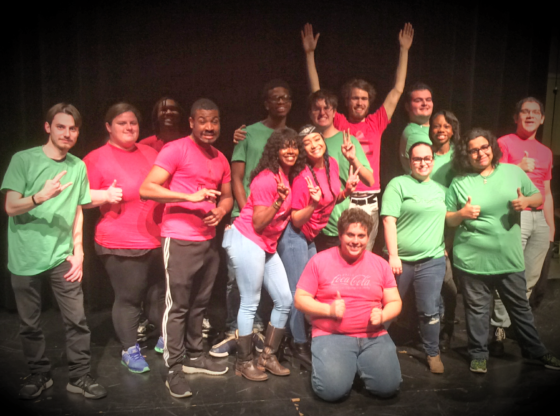 On Thursday March 1st, the Department of Communication Arts presented the Improv “Beatcamp” Show. The show was directed by Dr. Kathryn Grant, with George Liapes acting as the Assistant Director and Charles Caloia as Sound Operator.

“The Boot Camp was a 23 hour training, in which students learned the basic principles and skills related to improvisation. Those skills include working through agreement, finding the platform and narrative structure in an improvised scene, making group decisions, etc.

“We called the show, the Improv Beatcamp show because this year we decided to put a little extra emphasis on poetry and rhythm in our explorations. So poets were improvising to a beat, scene players were creating scenes to a beat, etc. This year’s show featured twelve undergraduate students, one graduate  student from the creative writing MFA, and two alumns. I hope the program continues to grow and attract an ever widening group of student improvisers”.

The show included poetry, “An Event That Can Spur a Movement” piece in which members of the audience provided a prompt, and dubbing scenes.

Players were split in two teams, red and green. After amazing performances by both parties, the judges declared the red team the winners.

Dr. Grant says they had an incredible time forming a community and creating something inspiring for an audience. She’s very grateful to the Department of Communication Arts for sponsoring this important work.

Anyone interested in auditioning next year should email kgrant@sfc.edu.