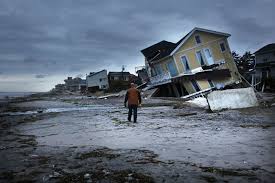 Imagine being locked inside your house due to a hurricane warning thinking it wouldn’t be that serious but when you look outside the window, you see a river flowing out in the street and onto your property. The worst is when you notice it starts to escalate when you not only see other people’s cars floating in the street but you also see the water getting into your house. This tragedy is what people faced during Hurricane Sandy, including myself. Hurricane Sandy really destroyed the lives of many and still to this day, people have not yet been able to move on and cope with what has happened.

Taking place in October of 2012, Hurricane Sandy was one tropical storm that no one can forget about and move past. Many believed that the storm would be a minor one but they were proved wrong when it was announced that the hurricane went from being a tropical wave in the Caribbean to becoming a tropical storm in just about six hours, reaching 74 mph winds. The National Hurricane Center even announced that the force winds led by the hurricane extended to 820 miles being the widest as well as the fact that the National Oceanic and Atmospheric Administration indicated that the storm’s wave destruction potential had hit the scale at 5.8 out of 6, which is identified extremely dangerous.

The night before the hurricane, many in the neighborhood thought that us Howard Beach residents wouldn’t be as effected like Rockaway would be but it was a few people who noticed that there was a full moon out and knew that with a full moon comes high tide. Others, including my family, feared that we would be hit and harshly affected by this storm and therefore we as individuals took control of our actions. Rockaway was a must in the evacuation process considering they were said to be Zone A but Howard Beach was said to not be such a big deal since we were Zone B.

Everyone knew Rockaway would be affected terribly but no one expected Howard Beach to get hit as hard as it did. Fear arose within people when the News forecasters had announced that they had mistook this storm for one that wouldn’t be so drastic, meanwhile we later learned it was one filled with severe extremities. For instance, when I saw how much water was continuously rising outside my house, coming up my stairs, I instantly had goose bumps and became nervous for what it really was like for Rockaway since they are all much closer to the ocean than we are. This hurricane was truly a disaster and it was as if we had our houses built in the middle of the ocean.

“As far as the eye could see, everything had become a disaster that I feared we would not be able to fix. Cars were totaled, under the water, and trees had fallen everywhere including on my house. It was a nightmare that I thought I would never wake up from,” Howard Beach resident James Polimeni explains.

Neighborhood residents prepared for the storm as much as they could by moving things from the basement and first floors up in the house but it wasn’t enough. The water was rising and at that point there was not much to be done besides fighting to survive. Those who evacuated from their houses in Rockaway lost everything they had whether it was personal belongings, cars, or even their houses. For those who stayed, such as my family and other Howard Beach residents, experienced harsh circumstances. We not only lost both of our cars to Hurricane Sandy but we had no electricity for 2 weeks and unfortunately there was not enough help from the city during this time. Con Edison didn’t show up until the end of the second week to try to fix the wires and FEMA, as well as the Red Cross didn’t start to come around to help people until after 3-5 days of the aftermath of the hurricane. Even FEMA’s help wasn’t considered to be much “help” at all since money was not evenly distributed to the people who desperately needed it.

“My house had over $100,000 worth of damage being that my basement flooded along with my first floor as well. However, FEMA only gave my family and I $28,000, which wasn’t nearly enough for us to rebuild our home the way we used to have it,” New Howard Beach resident Ellie Folias explains.

“My basement was also flooded reaching the top stairs to the first floor of my house creating over $85,000 worth of damage and of course FEMA only gave my family less than $15,000. My father and I had to rebuild what we had paying out of our own pockets,” Old Howard Beach resident James Polimeni adds.

“After the hurricane, people in the neighborhood came together to help each other out while waiting for The Red Cross to arrive. My neighbors helped my father and I to pump out all of the water from our basement as well as to cut down the rest of the tree that had fell onto our house,” explains James Polimeni. “When The Red Cross arrived, they gave out food, water, blankets, flashlights, and first aid kits, which we were thankful for. There was nothing more we wanted than to get back to our normal lives.”

It took more than just one year for people to replace their valuables and fix up their houses, and most had to do this out of pocket since FEMA didn’t give much money to those that deserved it the most. The Queens community just wanted to be recognized and to receive all the help that they could get without having to beg for it.

Although it has been five years now since Hurricane Sandy had happened, people today are still worried about whether another storm like that will happen along with what we can do to better prepare ourselves just in case it happens again. Some people have already moved out of the area while others are staying and raising their houses.

“I believe that if we prepare ourselves now and stick together to create a strong voice, we as a community will be heard, that way if another storm hits us, we will be more looked out upon as well as have more supplies and be much more safer during the storm than we really were in 2012,” James proudly says.