How Voting Habits Played a Role in the Election

Home /News/How Voting Habits Played a Role in the Election 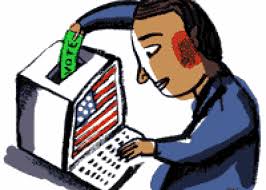 In the United States every American citizen has the right to vote. This raises the question about who, what, where, and how people get their information and opinions on what and who to vote for. Many people may assume that the younger generations get their information from social media and celebrities, but that doesn’t seem to be the case.

In actuality people are influenced by many factors when it comes to decision making in voting. “This social pressure can come from many sources, most notably parents, friends, and romantic partners,” Tamara Avant, Ph. D., department head of the sociology department at the South University of Savannah says, “Even employers and religious leaders can impact our political decisions.”

Even when young teens and young adults grow up, they still usually talk and go to their parents or friends for their perspective on things to make their opinions in the end. Although now a days there is so much talk about social media and all that it does for the world and with the electronic colonialism theory it’s easy to think that Twitter, Facebook, Tumblr, and more is the main source for younger people.

In some ways, a person could justify that and say something like, “well people are seeing what their friends and family are posting and that then justifies how Dr. Avants’ studies.” However, that may play some part in voting habits, it seems as though people still base their core values off of what they were raised with.

Because of the world systems theory, which basically breaks countries into three different categories: core countries, like the United States, semi-periphery, like Mexico, and periphery countries like Tunisia, people have to consider that social media across the world is much more limited in some cases.

Instead of people being able to look up things about what each candidate stands for or following their favorite celebrity on twitter to hear their opinion. The people in periphery and some semi-periphery countries have to strictly base their voting opinions off of what they see in person, which means that they must care about the future of their country in some way, shape or form.

In America it seems as though there’s a trend of people not voting because they don’t think their votes count. Meanwhile in the last election, that argument is proved to be invalid, specifically for voters in the rust belt. “It wasn’t so much that Donald Trump won the rust belt so much as though Hillary lost the rust belt,” Konstantin Kilibarda and Daria Roithmayr said in their article on voting habits.

All of this factors into how the people of the world, specifically The United States votes and why. In many instances, Hillary Clinton did fail to campaign in the rust belt and ended up with fewer votes than the former President Barrack Obama. And from the past it looks as though the people who live along the rust belt were not too happy with Obama’s presidency.

This all brings us to the conclusion that people factor in way more than social media when voting, no matter what age. The fact that Hillary Clinton did not campaign as much, therefor didn’t even have a rally in some of those states, really seemed to seal her fate. People within those states needed some extra reassurance that she was going to help them and she may have done that within a face-to-face setting.

With this election behind us, it seems as though people are already looking to the next. Preparing for another tight race, voting has never been more crucial in this country. Depending on where people are from and what they were brought up with, are still the main reasons for how people vote, no matter what age.

Susan Henner Speaks on the Future of Immigrants
Will Nintendo Make the Switch?