HOW KATE ‘GRANTED’ HER WISHES 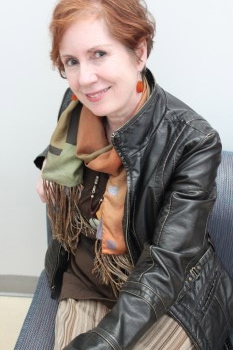 Playwright and actress Kate Grant is an adjunct professor at St Francis College who uses her passion and dedication for acting to enrich the lives of her students on and off the stage.

Grant started her acting career in high school and got work in a semi-professional theatre and loved it. “I felt more at home on the stage than I did in my life; I felt more graceful and in tune with myself,” said Grant.

She didn’t have enough money to go to college but knew this was what she wanted. She worked in a factory for a year, saved her money, auditioned, and got accepted in to the Boston Conservatory for Musical Theatre. In Grant’s second year she transferred to the Juilliard School in New York to study acting. She worked on and off for about 20 years.

Grant was the first actress to play in one of Horton Foote’s plays called Talking Pictures. She also worked at the Public Theatre starring in a play called Spring Awakening, which later became a Broadway musical. Grant also did a play at the Roundabout Theatre with Tammy Grimes and her daughter Amanda Plummer called A Month in the Country by Turgenev.

She said, “The hardest part, especially being an actor is feeling at times that you’re the lowest person on the totem pole. You don’t have as much control as you want to have.

“Juggling is also hard, I have a child and having to juggle my domestic demands, my teaching demands, and my artistic demands is also a struggle.”

Another thing that caused Grant anxiety and tension was wondering if she could execute everything in her imagination. “I had such high expectations of myself and I often fell short. I had to learn to have those standards and goals and meet myself in the moment and learn to accept myself.”

Her advice to young people striving to be actors and actresses is to be kind to yourself as you evolve as an actor and also “to think of yourself as an artist rather than merely an actor.” Artists can act but they can also write, direct, create sets, do publicity, and raise money in pursuit of an artistic project whether it is stage or film.

She did just that when she broadened her work in the theatre and began to write. She found play writing therapeutic as she wrote during a tough time in her life when her brother was ill. She found that she was successful and really good at it. “As a writer, seeing my plays produced and one of them published was really exciting.”

Grant’s husband, Ed Setrakian, was a professor and actor who inspired her to teach and act at the same time. He ran the Communication Arts Department and taught acting at St Francis. “He continues to be an inspiration to me, over the 30 years we’ve been together.”

Grant initially began teaching at St Francis because people would call her in in between acting gigs. When she met her husband he called her in to substitute, and then she became an adjunct professor. She eventually began to teach here more consistently. She also teaches at Drew University for an organization called Broadway Summit and another organization called Broadway Teachers Workshop.

“I love it, I feel like it’s another extension of my life as an artist. I love the young people, especially this year. I’ve had a wonderful group of students that are so open and so curious, and I find that it feeds me as I get older. The young people make me feel alive and present.”

Junior, Maria Fraschilla said, “Grant really knows how to teach students to open up and be comfortable in front of a crowd. The techniques she teaches help in everyday life.”

Grant’s goal is to try to get her students to understand the essential qualities of all human beings whether they are acting as characters or creating them. “Every human being, the deviant, the criminal, the pauper, the thief, the corporate executive, the runway model, everyone has the same basic goal in life; to become happy and avoid suffering,” said Grant.

The ultimate lesson of life, and the lesson she continues to learn over and over again is as the Dalai Lama said, ‘when we look through the eyes of compassion, we can see that we are all the same’, and my students teach me that over and over again.”