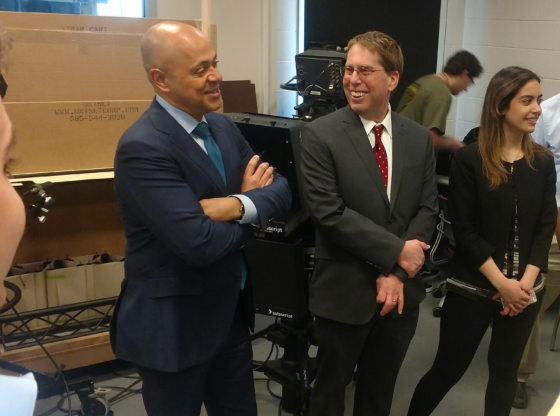 The anchor gave a few words of advice, cracked some jokes, described his experiences as a journalist, and even openly prepared for his commencement speech for St. Francis College’s graduating class.

Ushery started off by explaining that many microphones and cameras in the studios of NBC are manned electronically. Ushery revealed that, although these new tactics can eliminate jobs and humane judgement, digitally-operated mics and cameras ensure a sense of stability and they’re both becoming more widespread in the news industry.

David Ushery also disclosed NBC’s impartiality when it comes to modern politics. Ushery explained that, as a journalist, he must be objective when speaking of political figures and lauded the NBC News crew in Washington for their around-the-clock services during this polarizing time in national reports.

Ushery then divulged into his reporting on tragic events, like the Sandy Hook Elementary School shooting in December 2012. Ushery said that he went up to Connecticut to interview the parents of one of the deceased children and “quietly” sat in to “listen to their story” before explaining to them what to expect when other media services call them.

Ushery said that tragic stories like this one are less about pressuring the interviewees but broadcasting the stories of those who want to raise awareness on such issues. The NBC News anchor also revealed that this nonpartisan viewpoint in journalism comes as a result of covering many local, national, and international news stories truthfully.

Ushery also stressed neutrality, claiming that the first purpose of broadcasting is to “present the facts.” Ushery also said that he works at 30 Rock with fellow NBC News anchor Michael Gargiulo and SFC interns at NBC, including Danielle Francavilla and Anthony Iannizzi.

Ushery also took a substantial amount of time to devote the conference to the students, giving them advice on how to prosper in the news industry and jokingly asking the seniors what they’d like to hear at graduation “besides “you’re hired!”.”

Ushery finished his conference on a light-hearted note, telling the graduating seniors that they should “try to laugh at my bad jokes” at the ceremony.