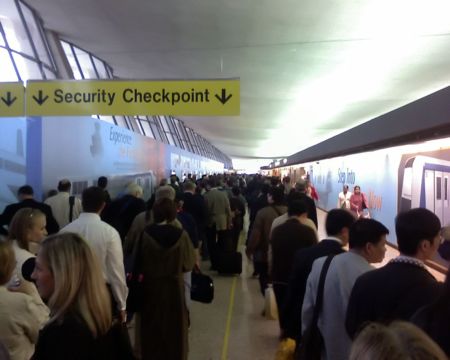 With increased security at the airport, travelling has become a stressful process, especially when returning to the U.S. from abroad.

If you have ever traveled abroad, you understand the whole process of leaving the country. I assumed that coming home would be much easier. Unfortunately this is not the case. With increased security and increased fuel prices, flying is becoming more and more expensive. The airports are still understaffed in areas that are most important.

This summer I traveled abroad twice. I flew from Newark, New Jersey to Rome and during another trip I flew out of JFK Airport to Antigua. In both airports I had the same terrible experience coming home.

JFK has approximately thirty-two windows that are used to admit citizens and visitors back through customs. The night that I returned five international flights arrived at JFK at the same time, with an estimated 500 passengers.

I exited the plane and entered U.S. Customs. This could be a very simple process but if it is an off day, you could be in the airport for hours. It took my family two hours to get through customs back into the United States.

Out of the thirty-two windows only four were open that night. As time passed people were beginning to get impatient. There were some families with babies and young children, and seniors that could not even stand comfortably on a two hour crawling line.

Citizens were demanding that managers provide an explanation. How could five flights fly in and the airport only have one-eighth of the staff on duty? Managers said they were doing the best they could do, but passengers would beg to differ.

People were unable to contact car service and family members because there was no cell phone service in customs. If you got off the line you would most definitely be losing your place.

My parents have been travelling for many years and they have never seen anything like this before. How could entering a foreign country be easier than coming home to your own country?

All the money spent on flights this summer and into the holidays should be redirected into paying the guards in customs because with wait times like this you might as well stay on the line for Space Mountain in Disney World.