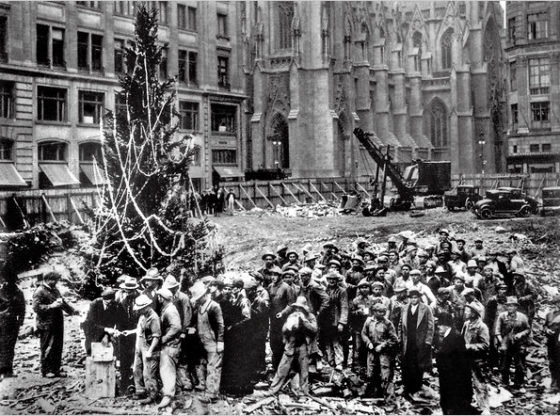 Once again, the tree is up and lit for the season in Rockefeller Center. It is busy as ever, but it has not always been that way.

Now to get a glimpse of the tree lighting, people have to arrive several hours beforehand.

The first tree stood at 20 feet tall, and although large at that time, it seems miniature to what is there today.

Then, the tree was decorated with strands of cranberries, paper garlands, and some tin cans, as today it is covered with thousands of lights.

Throughout the years, there have been several occasions where there were numerous trees lit.

The first time was when the skating rink in Rockefeller Center opened, there were two trees lit, and in 1942 there were three smaller trees lit to promote the war effort.

There have been several upgrades and changes to the tree over the years, such as the decorations and lights have become more eccentric and intricate.

Now the Norway Spruce tree is covered in over 30,000 LED lights.

The size of the tree has dramatically increased, now standing over 80 feet tall.

It has become a family affair and a two-day event when it started to be broadcasted on TV in 1951.

The event continues to be televised nation-wide today.

It brings millions of people from all over the world to visit the sight of the Rockefeller Center tree.

It has been a symbol of Christmas in New York City for over 80 years, and it continues to bring people together for the holiday season.