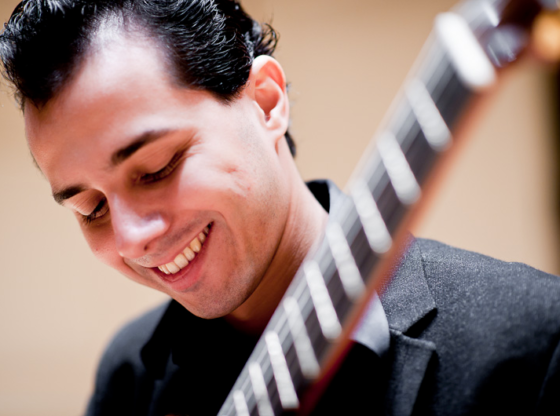 This is SFC’s 19th year of the concert series.

Dr. Forsberg, who has been the director of the concert series since its start in 1999, prepared a truly great show for the audience.

A native Brazilian and graduate of The Juilliard School and the University of São Paulo, Kouyoumdjian was the perfect person to play at our Hispanic Heritage month concert.

His hard work and talent earned him a win at the XXI Souza Lima National Guitar Competition in 2010, and he has played all over the world.

In addition to Hispanic Heritage Month, the concert was in support of Professor Esther Del Busto.

This concert is dedicated to Professor Del Busto, a Cuban born professor who is loved by all of her students, who retired at the end of the 2018 spring semester, after 23 years of being an adjunct professor here at SFC.

At the end of the show, Kouyoumdjian played a few Brazilian songs to in salute to his homeland.

If you are interested in hearing some of Kouyoumdjian’s work, you can listen to his two albums “Surfboard: Solo Guitar Works from Brazil” and “Kouyoumdjian Plays Bach: New Transcriptions for Guitar”.