HIP, HIP, JORGE! A LOOK BACK AT JORGE POSADA’S CAREER 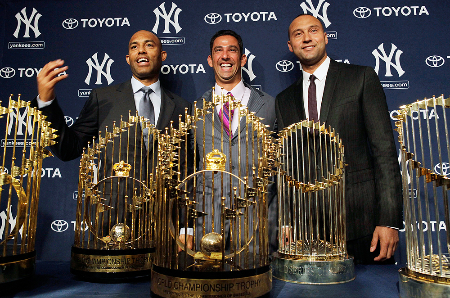 Jorge Posada has decided to retire after 17 seasons of playing baseball for the New York Yankees. Posada held a press conference on Tuesday morning at Yankee Stadium to formally announce his retirement.

He was accompanied by wife Laura, and his two children, Jorge Jr. and Paulina. Posada played his entire 17 year career as a Yankee. He became very emotional during the press conference.

Posada was drafted by the Yankees in the 24th round of the 1990 draft. He was a second baseman and was converted to catcher in 1991. Posada spoke about how the transition was not easy and how he spent too much time chasing baseballs to the backstop. By putting on the catchers gear Posada turned into one of the most valuable players in the Yankees organization.

He was a power hitting catcher who can hit from both sides of the plate.
Posada’s greatest inspiration came from his father, Jorge Sr. He instilled a hatred for losing in his son. This feeling drove Posada to excel on and off the field. Jorge Posada won five World Series with the Yankees and played in seven. His career numbers are on par with each catcher that is currently in the Hall of Fame.

Posada retires with a .273 batting average, 275 home runs and 1,065 RBIs. He contemplated playing again this year if his home run total was closer to 300, but knew the task would take two or three years to do. He knew it was something that was not obtainable.

Posada said: “I could never wear another uniform.” These words mean everything to Yankee fans who knew Posada was receiving offers to play from other teams. It means the world to them as well as Jorge to retire as a Yankee. Posada, now 40 years old looks forward to spending more time with his family.

The illustrious “Core Four” is now down to a dynamic duo. Andy Pettitte, Mariano Rivera, Derek Jeter and Jorge Posada grew up in the minor leagues with each other. They won five World Series championships together from 1996-2009. Pettitte retired last year and now Posada joins him. Rivera and Jeter are the only two that remain on the team.

While fans recollect all of the memories Posada has given them over his career a majority of them recall the 2003 American League Championship series. In Game 7 Posada hit a bloop double into centerfield off of Pedro Martinez to tie the game for the Yankees. His fist pump on second base after the runs scored with the stadium rocking is an image that will forever resonate in the minds of Yankee fans. Posada was behind the plate in 1998 when David Wells through his perfect game.

Posada thanked the Yankees organization with all of their help to aid research for his foundation, The Jorge Posada Foundation. His son suffers from Craniosynostosis. With the help of the Yankees the foundation has been able to help many children over the years. His mission off the field to help children with the disease is another reason to respect all that Posada has done on the field.

He was received phone calls from ESPN, MLB Network and the YES Network to become an analyst but he is not interested at the time. Posada laughed when a fan said that catchers usually make great managers.

On his future he said: “I don’t know what’s going to happen for me.” “I really don’t. I know I want to be home, I want to relax, enjoy it and then see what comes.”

Posada rides off into retirement. He will be truly missed in the dugout by his team mates and each one of the 50,000 fans that fill Yankee Stadium for every game. Posada’s last at bat was him hustling down the first base line to try to beat out an infield single. While he was called out this last at bat sums up an entire professional career.

Whether it was at catcher of designated hitter Posada came to play each and every day. He gave his all for the team and the fans showed unwavering support for him in return.

The 2012 season is around the corner. The Yankees will be without a legend. His legacy as a Yankee will be forever cherished. Cooperstown should be in the future for Jorge Posada.