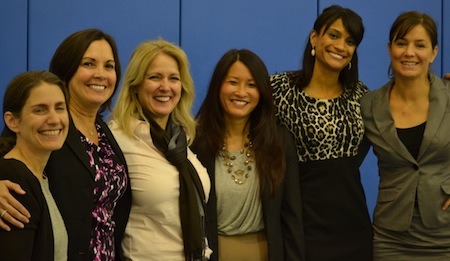 On Wednesday, October 26, the Women’s Center of St. Francis College presented a forum for all female students, emphasizing the importance of self confidence, networking and overcoming obstacles.

The event was held in the Genovesi Center and hosted by Dr. Athena Devlin, head of the Women’s Studies minor, and Irma Garcia, Athletic Director.

There was an impressive turnout of young women looking to learn about networking, self confidence in the workplace, and mentoring.

Each of them shared their unique stories about their diverse upbringings that made them who they are today.

Tibbetts is the current Assistant Principal at Christ the King high school.

She is also a Department Chair and hopes to become a Principal in the near future, and then to open up her own charter school in the area, focusing on the growth of her prospective female students.

Growing up in Wisconsin and being the first person in her family to graduate college, Tibbetts felt stuck in the monotony of the midwest and traveled to Phoenix to focus on her passion, basketball. She had an incredible talent that allowed her to travel overseas and then to finally make it to the WNBA.

Her hard work and perseverance were the most important factors to her success, she concluded. From there she came to New York City and coached college basketball at St. John’s University. She realized her love for education and put all her energy towards moving into that field. Above all, Tibbetts stressed the importance of having and maintaining passion in whatever you choose to do with your life.

Taryn Brown is a corporate associate at Akin Gump Strauss Hauer & Feld in Manhattan. Brown is no stranger to St. Francis College, as she is a former Head Assistant Coach for the women’s basketball team.

Brown traveled abroad and coached basketball internationally before trying her hand at law. She has had her fair share of ups and downs (including a failed reality show), but she said, “find the opportunity in your obstacles.”

Brown was perhaps the most prominent promoter of networking. During the group discussion part, she expounded upon the importance of meeting professionals in your field and getting as much advice as possible.

Anna Lam is the current Vice President/ Director of Retail Sales and Operations at Cohen’s Fashion Optical. A Hong Kong native growing up in California, Lam has lived all over the States until settling here in New York City.

One would never believe that this strong, beautiful woman would have suffered from low self esteem in her youth; it is clear that her success and perseverance have given her the self-confidence that makes her who she is today.

During the group discussions, Lam’s greatest piece of advice was to take all the opportunities that are presented to you. She is a proponent of traveling and taking the time needed to figure out where you are supposed to be.

Ivy Stark is the Regional Chef for Dos Caminos Restaurant, but surprisingly started as a History major in college. Like many young college students, Stark truly did not know what she wanted to do with her life after college. She emphasized giving yourself the time to answer your calling. She has rapidly become one of the most highly acclaimed chefs in the New York metropolitan area.

Interestingly enough, none of these women expressed any particularly serious episodes on the issue of inequality with men in their respected workplaces.

They all stressed the importance of self confidence. In their opinion, even male dominated work places have become much more progressive, and that the trick is to not focus on it.

These four women were incredibly inspiring for all young females at St. Francis College. Too often, especially with the rocky economic downturn in this country, are students told to abandon their passion and take up a career in something that will make more money.

It was incredible to hear all four of these ladies who are so successful, emphasize the importance of doing something you love. The event was a great success, thanks to Dr. Athena Devlin and Irma Garcia.

For more information on SFC’s Women’s Studies Minor, check out: