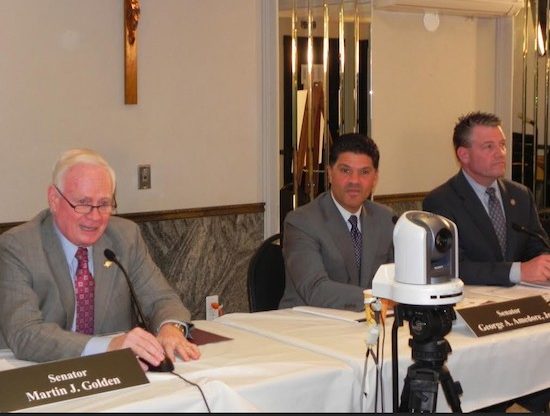 Senators Marty Golden (Bay Ridge), George Amedore Jr. (Ulster County), and Terrance Murphy (Putman County) are all members of the Task Force on Heroin and Opioid Addiction which gathers and presents information about the drug crisis, as well as offers viable solutions to fix the problem.

Several other individuals spoke at the panel, including narcotics specialists and various advocates for the rehabilitation of those affected by drug use.

Heroin addiction usually evolves from abuse of prescription pain killers. According to the Brooklyn Eagle, 1.3 million prescriptions for Oxycodone were filled in New York City in 2014, an astonishingly disproportionate figure to the city’s population of 8.5 million.

“For the new addict, the gateway is pills,” said New York City Special Narcotics Prosecutor Bridget G. Brennan, who also spoke at the panel, according to the Brooklyn Eagle. “Heroin is cheaper and it’s built to get high. […] The heroin we are seeing is very, very pure.”

The panel noted that 1,000 pounds of heroin were seized in 2015, a figure that stands in stark contrast to the 600 pounds that were seized in 2006. Additionally, Police Chief Brian McCarthy testified before the panel that the number of heroin-related arrests from 2014 to 2015 jumped from 3,243 to 4,203.

The Senators’ panel meets in the wake of several recent drug-ring busts executed by authorities across New York City. In late December, authorities discovered a massive heroin trafficking ring operating out of Queens and Brooklyn that resulted in a 281-count indictment of nine separate individuals with cash, cell phones, firearms, and drugs being seized by police.

Just two months earlier, 25 individuals were arrested for operating a lucrative heroin ring centered in Williamsburg. The enterprise allegedly netted $1.5 million in 2015, and had been operating successfully for two years, according to the Brooklyn Eagle.

One of the biggest problems that the Task Force is facing today is that heroin addicts do not fit the typical “drug addict” persona, nor does the drug seem to have racial or socio-economic barriers. The biggest operations authorities have busted are occurring in southern Brooklyn and Staten Island in neighborhoods that are typically considered white and high income: Dyker Heights, Bay Ridge, and Bensonhurst are just three examples of the neighborhoods where the biggest busts and most cases of overdoses have occurred.

The hidden heroin epidemic in these neighborhoods is an uncomfortable problem that no one seems to want to address. David Bochner, director of Cornerstone of the Medical Arts Center—a group of treatment facilities that operate in Queens and Upstate New York—also spoke to the panel about the lack of support that heroin users have in New York State.

“No one wants [a treatment center] in their backyard,” Bochner told the panel according to the Brooklyn Eagle. “Everyone talks a big game, but when it’s time to treat addicts… people are leaving the state and leaving the city.”

Heroin users are often funneled into state-sponsored methadone programs that offer sub-standard living conditions and often have a lack of beds for people who really need them. Heroin and opioid addicts tend to otherwise be pumped into the prison system.

Progress on this burgeoning problem remains questionable as New York State lawmakers are still questioning where funding for programs to curb heroin, methadone, and opioid addiction will come from.

BROOKLYN’S FIRST SKYSCRAPER?
SERBIA’S DZIGURSKI AT AN ADVANTAGE IN BROOKLYN