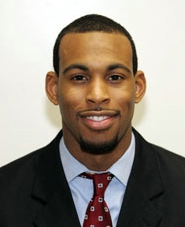 Beep beep beep my alarm goes off it’s 6:55 in the morning, my roomate wakes up and immediatley turns on the music.

This is our ritual every day and will be until March because at 7:20 if we’re not washed and out the door and heading to weight training then the following day we will be up at 6 in the gym running suicides.

It sounds bad but this is the life we chose, the life we worked so hard to get and the life of a Division 1 basketball player.

I’m a senior at St. Francis and this is my second year doing this routine. At first it was kinda hard but now I can’t sleep at 8 without waking up and thinking I missed weights or practice.

I’m the starting center for the Terriers and though I’m a little undersized at my posistion being a mere 6″7 I still managed to come in second in blocked shots in the conference behind a player who was 6″10. I also won defensive player of the year for St. Francis.

For my senior season, my goals are much broader. This year I would love to average a double-double but it just means I’m going to have to work harder.

I’m willing to put in those extra suicides and extra hook shots and lane slides to get my game to the next level.

Well, till the next time, this is your friendly spider (sorry I always wanted to do that) — but seriously do read in because as the season progresses it only gets more interesting.

If you see me in school and want to ask some questions, be my guest and I might include it in the column next week.

Go Phillies! Even though I’m in New York, I still have to represent my home team.

CAPTAIN, MY CAPTAIN JETER CAN SEIZE THE DAY
SFC PARKING TAKES THE PATIENCE OF A SAINT