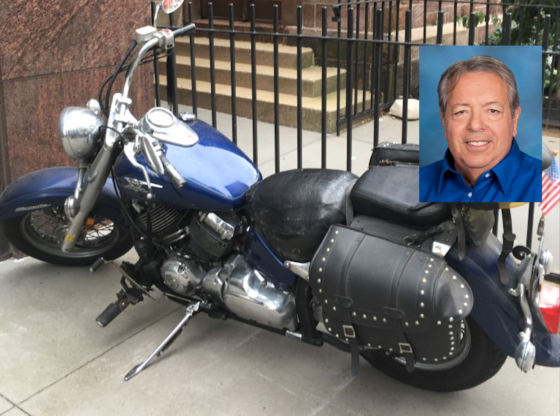 Riding a motorcycle is a fun convenience for Biology professor, Dr. Steven Lipson.

Yes, you heard it right. Dr. Lipson rides a moderate Yamaha 750 cc to and from work,  and he is the only faculty member to do so.

“The classic Harley-Davidson would be nice to own, but Harley maintenance (and repair) is somewhat expensive,” Lipson said.

Although he is proud of it, it was also a serious importance while traveling as a young student.

As an NYU grad student, he found riding a motorcycle to be beneficial when commuting in and around the busy city of Manhattan.

“The motorcycle permitted me to save time, due to the ease of parking in the city (Manhattan), in traveling to and from my research at the college, part-time teaching responsibilities, and clinical/diagnostic responsibilities at the Memorial Sloan Kettering Medical Center” Lipson continued.

Traveling to and from Long Island was also a hard struggle at the time, so the motorcycle saved him a lot of time getting to work.

“Heavy Long Island traffic was also an issue in my continued use of the motorcycle, as I served at that time as a mentor to students at C. W. Post College some 20 miles east of the NSUH” Lipson added.

“Again, the motorcycle is extremely convenient in dealing with New York parking and traffic! Indeed, I have additional time to pursue my academic and research responsibilities.”

Along with being an 18-year veteran professor at St Francis, he still uses the motorcycle when researching with collaborators at Mount Sinai Medical Center.

On the flip side, he doesn’t have the time to go on weekend outings or trips with the motorcycle.

However, Lipson is very much content with how he spends his time; but he doesn’t suggest that every person should ride one.

“I would not suggest that others ride a motorcycle to school, work, or pleasure, as such vehicles admittedly are dangerous.

“If I may be so bold, it takes that certain person(s) to avoid accidents by riding a motorcycle in a mostly defensive manner” Lipson said.