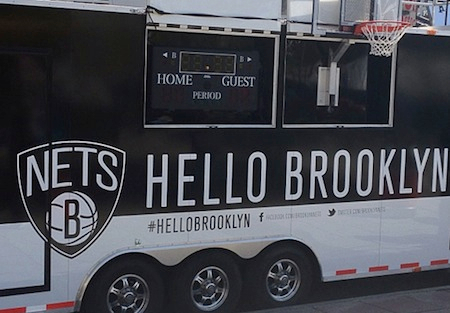 The Brooklyn Nets open up their inaugural season in their new home, the Barclays Center on Nov. 1. They will start a new version of a ”subway series” against the New York Knicks.

The Knicks will be bringing back Carmelo Anthony, J.R. Smith, Amar’e Stoudemire, and Tyson Chandler. They also have brought in veteran point guard, Jason Kidd. Now with the Nets bringing their squad to the big city.There will be competition to be the best in New York. The Nets have brought back Deron Williams, Gerald Wallace, Brook Lopez, and added Joe Johnson via trade with Atlanta.

What is the reaction to the move? Brooklyn has not had a home team in any of the four major professional sports for over 50 years after the Dodgers left for the West Coast.They are ready to back their team all the way.

“I believe that the Nets have made a great choice in moving to Brooklyn. Brooklyn has a very rich history and very different cultures that reside within it. There’s no borough like it. This is also a great opportunity for this organization to improve its image by getting involved with many of the educational, artistic, and athletic facilities around it on a larger scale. I’m very excited to see what the Nets have to offer down the road,” said Kepler Auguste, the president of the student government at St. Francis College.

For years the Nets have had tough luck in New Jersey. Since the days of Kidd, Vince Carter, and Richard Jefferson, they have been an easy win for opposing teams. They have finally put together a team to be taken seriously. They have brought back one of the best point guards in the league in Williams, and added one of the best shooters in the league, Johnson, to go along with a healthy center, Lopez. Don’t be surprised to see the Nets shirts, jerseys, and hats around the city increase exponentially.

“I encourage the move to Brooklyn because it makes basketball in New York much more interesting. It creates a rivalry and let’s you see who the real Knicks fans are,” said senior Frank Stampfl, a die-hard Knicks fan at St. Francis College.

The Nets will do their best to gain a fan base in a city that has loved and adored their Knicks for so long, only to be disappointed year after year. The Nets have brought some new superstars to town who should not be taken lightly.

“I don’t want people to think I’m just a bandwagon fan, I’ve always been a Nets fan,” said Fred Fox. Fox, a Nets fan for many years, has been waiting for the Nets to finally have their time to shine. Now he is among the college students in Brooklyn who will be rooting for the Nets. He is proud to say he was there first.

The bandwagon will certainly be going through New York City and many frustrated Knicks fans will probably be getting on. The Nets have not won a championship since 1976, the final season of the ABA and have not had a winning season since 2006. They have not made the playoffs since 2007.

The New York Knicks have not won a championship since 1973, or a division title since 1994. Their last apperance in the NBA Finals was in 1999 when they lost to the Spurs. Although they did make the playoffs last year as the seventh seed, they only managed to win one playoff game against the Miami Heat.

“It’s a big deal, this move brought a lot of excitement to our city, especially Brooklyn. Fans are looking forward to the Nets starting on a new slate and the Battle of the Bridge rivalry with the NY Knicks,” said Dre Calloway, a basketball player at St. Francis College.

From the ”Big three” of the Miami Heat: LeBron James, Dwyane Wade, and Chris Bosh celebrating as if they were champions before they even played a game together, to Jets fans proclaiming Tim Tebow should be their starting quarterback before he’s even done anything in New York; sports is one of the only businesses where one can get paid and praised before they actually do their job.

When it comes down to it, basketball and all sports in general is just a recreational activity – a game. But the reason it gets so much attention; the reason there is such an absurd transfer of millions of dollars between owners, players, fans, television networks, and so on…is because of the hype; the buildup of hysteria that comes along with stardom.

What’s makes this move such a huge deal is the city that it is about. Brooklyn is full of small businesses and strong opinionated citizens. That is why it is not solely a basketball topic.

“It is great for the fans who don’t have to travel outside the five boroughs to see their favorite team, but also for the economy of Brooklyn. The Barclays Center will not only bring in the sports fans, but also fans who come to see music and other entertainment events held there,” said Kenny McLoughlin, a student at SFC.

“It was a good move. There will be more fans and more spotlight in Brooklyn. They have a chance to play for a historical part of the city of New York and make them proud like the Dodgers once did,” said Chris Liander, a SFC student who loves basketball and is looking forward to this upcoming NBA season in Brooklyn.

“I like that the Nets are coming to Brooklyn, because it will bring a more positive energy to the city and it gives Brooklyn something that is theirs,” said Caitlin Ballek, a student at St. Francis College.

The Nets have had six homes since their existence, all of which have been in New Jersey or Long Island. They hope that they have found a permanent place to call home in the Barclays Center.

The Nets move to Brooklyn should and will be a successful decision for the franchise and the city. It is a win-win. They will expand their fan base, gain a much stronger support, and be more attractive to big free agents from now on. The Nets are serious and ready to compete and the city of Brooklyn is ready to back them up.