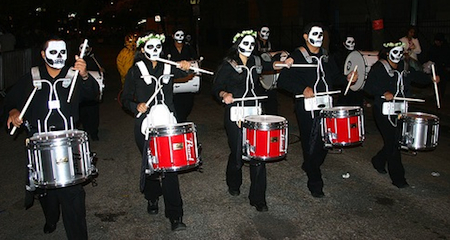 The Halloween Day Parade which took place in Greenwich Village was definitely a night for the strange.

The parade was originally set to begin 7 pm but due to some of the marchers being fashionably late and police officers clearing the streets, the parade did not start until 8 pm.

Many people stood on West 14th Street waiting in the cold for the parade to start. However, they were entertained by the costumes worn by others in the crowd.

Some people even had the chance to pose in pictures with their favorite characters such as Alice and Wonderland’s the Mad Hatter and the superhero Kick-Ass.

It was all worth the wait once the parade began. The parade offered everything from original store bought costumes to outlandish “I made it myself!” attire.

The parade started off with paper mache skeletons that celebrated the day of the dead. Following this was a distorted woman running up and down the street holding a demon baby in one hand and a knife in another. It took awhile for many to notice that she was Rosemary from the 1968 horror film Rosemary’s Baby.

There were also some costumes that were painted on, exposing the human body. People dressed as the New Year’s Baby and swimsuit models despite extremely cold weather.

With all its festivities, it was clear that people loved seeing creative costumes. Costumes included everything from Lady Gaga’s Telephone coke can hair to a woman dressed as Malibu Barbie still incased in her box.

Attendee of the parade Andrea Hayes said: “One thing that is evident when you attend these parades, is there’s always spirit. It’s a time were all the reserved quiet people come out and act whacky for once. It’s also that time of year where it’s a pageant for ‘who can be the craziest?’ For people who have been crazy all year round.”