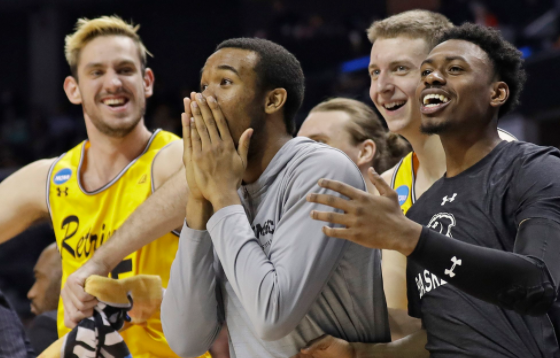 UMBC joined West Virginia and Virginia Tech as the only teams to defeat the ACC Champion Virginia Cavaliers this season.

This game marked UMBC’s first tournament match win in school history. UMBC made 54.2% of their field goals and successfully converted 71.4% of their free throws.

Jairus Lyles led the team with 28 points and went 3/4 on three-point attempts. Joe Sherburne, Arkel Lamar, and K.J. Maura all tallied double-digit points for UMBC with 14, 12, and 10, respectively.

Ty Jerome and Kyle Guy were the only two Cavaliers to score in the double-digits and led Virginia in scoring, tallying 15 points each.

Virginia allowed an average of 53 points per game all season long. They gave up 53 to UMBC in the second half of this game alone.

Virginia head coach Tony Bennett called it a “thorough butt-whipping.” UMBC head coach Ryan Odom stated that he was “so proud” of his team and the Retrievers are “playing at a high level right now” with an improved defense.

Jim Nantz, Grant Hill, Charles Barkley and Kenny Smith all deemed the game the greatest upset in College Basketball history because it was the first time a #16 seed beat a #1 seed.

Kenny Smith added that champions must “at some point” feel “uncomfortable” with so much pressure on them.

Virginia was the #1 ranked College Basketball team in the country with a supposedly durable defense. UMBC’s explosive offense exploited it.

The impossible victory came during the carnage of the 2018 NCAA playoffs, where 9 of 16 top-seeded teams lost in the Tournament’s opening weekend.

Never before had a 16th seed beat a Number 1-ranked team in the NCAA College Basketball Tournament but Friday night, the UMBC Retrievers did just that.