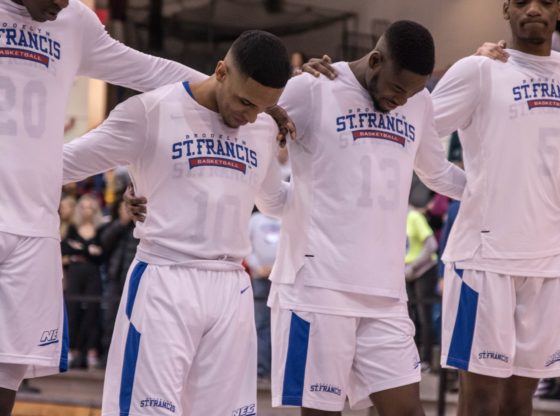 On Saturday April 27th, 2019, the 6thannual Gotham Hoops Invitational will be held at the main gym at St. Francis College (the Pope Physical Education Center) once again. It has been stated that graduate guard Glenn Sanabria and senior guard Keon Williams were selected to compete in this year’s Invitational.

“We wish Glenn and Keon the best of luck as they are set to play in the Gotham Hoops Invitational next weekend,” said Terriers head coach Glenn Braicato SFC Athletics. “Both guys have meant a tremendous amount to our program over their careers, and we look forward to their continued success in the future.”

The Gotham Hoops Invitational showcases the top 36 men’s college basketball seniors each April. Each year, the tournaments provide each participant the opportunity to be scouted by the NBA, the G League, and FIBA as well. A total of 125 alumni of the Invitational have signed contracts to those leagues.

Glenn Sanabria completed his graduate season with an average of 12.3 points, 3.1 rebounds, and 2.6 assists per game. He was also able to conclude his career off with a strong statement as he was listed to the All-NEC Third Team, NABC All-District 18 Second Team, and DI-AAA ADA Scholar-Athlete Team.

On November 24th, in a game against Niagara University, Sanabria ended up recording 1,000 career points and becoming the 32ndplayer in St. Francis College history to do so. He finished his career with a total of 1,347 career points.

As for senior Keon Williams, he was able to play a total of 104 points throughout his 4 years at St. Francis while starting 35 of those games. Williams averaged a total of 3.4 points and 3.0 rebounds throughout his time with the school. On November 28, 2018, he also scored his career high in points with 13.

This year’s Gotham Hoops Invitational will start at noon on Saturday, April 27th. Good luck to our fellow Terriers. Game will also be broadcasted live on GothamHoops.com.