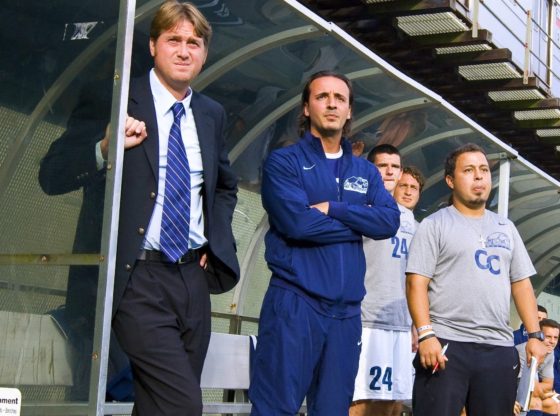 St. Francis College men’s soccer head coach Tom Giovatto looks to build off the team’s record of 10-5-3 last season and take that momentum into the 2012-13 season.

“It was a pretty good year overall. The last game of the year was the highlight of the season. The team played their best game. It was a good turning point. I hope these upcoming games will show that we turned the page and we are ready to take that next step,” said Giovatto.

Giovatto learned his craft from Cesar Markovic, who is the head coach of the NJIT mens soccer team. He describes Markovic as one of his biggest mentors and one his closest friends. The two bounce ideas off each other constantly.

With the season underway, Giovatto’s main focus is leadership.

“It can’t just come from the coaching staff; it has to come from the older players. We have a big group of seniors this year. We really need them to take that role and teach the younger guys so it gets passed on throughout the years,” said Giovatto.

Giovatto, along with his assistant coaches, Sinan Selmani and Christian Cuba, expect to compete for the championship this season. This years team features Cyril Coisne, Harry Odell, and Avyay Gujral. Coisne plays as a defensive midfielder and center back. Odell plays in the center midfield. Gujral is a midfielder and he is starting to find his role on the team.

Female students have also taken an interest on starting a team at St. Francis.

“I know that there is some interest. I’ve been asked by a lot of the girls at school on when I would start the program. It’s not my decision but I would do everything I could to help them out.”

The St. Francis soccer team play their home games at the Aviator Sports Complex. Giovatto hopes that the team will have their own soccer field within the next couple of years, which might open the door for aspiring women soccer players at St. Francis.