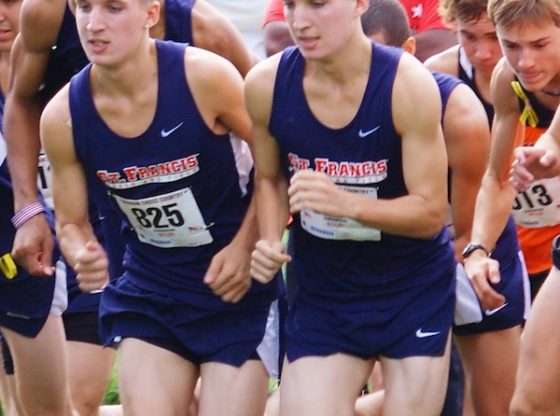 SFC seniors Paul and Joe Gilhuley have been running around the halls of SFC for the past four years, literally. The identical twins have been members of SFC’s track team since their first days on campus.

Joe said, “Honestly, we started running because our dad made us run.” In the early years, running for the boys was a recreational sport.

By their junior year of high school, running became more than just an after-school activity. “We started getting good and winning races and that’s when it became fun,” said Paul. Both brothers won MVP awards for three consecutive years in high school.

With high school running times that would impress just about any division one coach, the twins chose SFC to be their home for college.

Their decision to choose SFC was due to the warm welcome of the SFC track coach, Kyle Brown.

“Coach Brown is more than a coach … a father figure; from the moment we stepped into his office, his motivational words made us want to be here,” said Joe.

Paul added, “The transition from high school to college was rough, especially commuting, but the athletic staff made the adjustment much easier on us.”

As the brothers are currently running their last year as division one athletes, much has changed since the moment their sneakers came through the doors of SFC. Improvements have been made as a team and individually.

The team has been averaging about 50 miles or more per week, even through the long hot days of summer. They are hoping to make this cross-country season the best one yet. “Let’s face it, its our last year to do it and do it right,” the brothers agreed.

According to the brothers as a team they haven’t been running to their best potential, but it is only the beginning of the season.

The division one boy’s cross-country races are 5 miles (8K). The meets are held all over the tri-state area, but for the most part, the boys run in Van-Cortlandt Park in the Bronx.

Paul holds the school record for an 8K, which he ran his freshman year with a time of 25:38 breaking his brother Joe’s previous record of 26:01.

Both times remain the boys personal best, but this season they are more than ready to break their freshman year records. They have upped their mileage with the help of Laurie Kurtin (referred to by the boys as “Coach D”) who created a training plan to help the boys reach their goals. With practice for about two hours everyday, followed by weight room training on most days, the team is more than ready for the season.

The team went to summer running camp this year at Camp Timberlake West where they spent long hours running miles and miles of hills. The training was tough according to the brothers but it was exactly what they needed to begin the cross-country season.

Workouts begin this week, which means more training hours along with eating healthier and sleeping longer. For the team the next big race on the calendar is Metropolitan Championships on October 6, 2012, at Van Cortlandt Park.

The brothers cannot believe that it is already their Senior Year at SFC. Coach Brown said, “It has been an interesting experience to say the least coaching the twins. It has been a joy to watch them come in as freshmen and watch them grow as athletes and men—each of them has done a lot for the program—but the clocking is ticking now as they start their senior year.”

The twins are dorming at SFC for their senior year and both agreed the decision to live on campus really enhanced their college experience.

With the exception of three teammates, all of the boys on the cross-country team are seniors as well. For the boys track program they are losing some of the best runners next May upon graduation; which means recruiting will be even more important next year for the program. “The team is like a family, we all get along—it is more than just a team but it feels like home,” said Joe.

Although the twins may be in their cap and gowns this upcoming May SFC most certainly will not be the end of their running careers. The boys have a shared dream to run professionally for Italy in hope of running in the 2016 Olympics (or at least make the trials).

They would individually focus their training into middle distance races such as 1500m and 800m events. This dynamic duo may have already left their mark as runners at SFC, but this is just the beginning of their running careers. With hard work and perseverance the twins are more than ready to go the distance into the future.