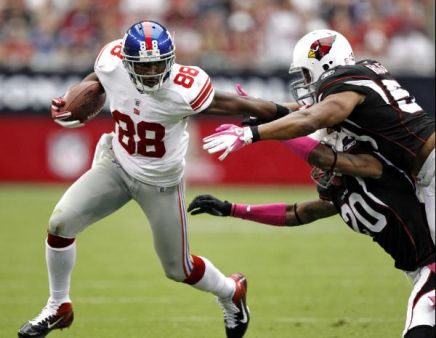 Eli Manning orchestrated a 21-point fourth quarter to rally the New York Giants (3-1) over the Arizona Cardinals (1-3.) Manning threw for 321 yards, including 180 in the fourth quarter and two touchdowns.

Wide receiver Hakeem Nicks reeled in 10 catches for 162 yards and the go-ahead touchdown with 3:10 left in the game.

Arizona took an early 6-0 lead off of two field goals by Jay Feely before the Giants responded with a 10 play, 68 yard drive that was capped off with a 13-yard rushing touchdown by Ahmad Bradshaw.

The Cardinals took charge in the opening possession of the third quarter. Larry Fitzgerald became the Cardinals all-time leading receiver when he snared a 47-yard pass from Kevin Kolb that set up a go-ahead touchdown by Beanie Wells.

Arizona put themselves in scoring position again in the third quarter when David Carter forced a Manning fumble. Wells would punch it in again to give Arizona a 20-10 lead.

New York would march back up the field in the fourth quarter, scoring off of a one-yard rushing touchdown by Brandon Jacobs.

Jacobs scored just one play after a touchdown pass by Manning to tight end Jake Ballard was reversed by the game’s officials.

Arizona maintained their 10-point lead when Wells scored his third rushing touchdown of the game with 8:25 left to play. The Giants would not give up, however, scoring on their next two possessions with touchdown passes by Manning to Ballard and Nicks.

New York will host Seattle (1-3) while Arizona travels to Minnesota (0-5) next week.