GIANTS, JETS GO WIDE IN ROUND 2 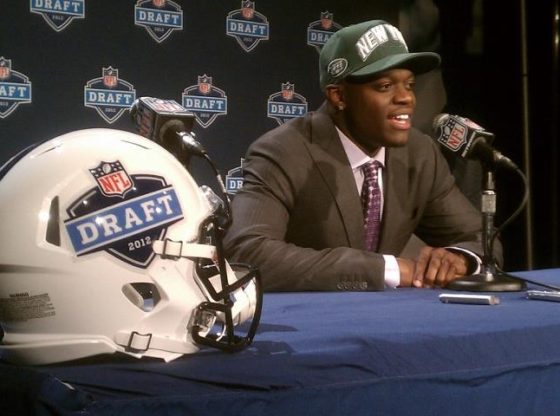 With two players shockingly falling during the second round of the NFL Draft, the New York Giants and Jets addressed their need at wide receiver.

Both Hill and Randle were invited to the NFL Draft and were among four other players who were not selected in the first round.

I was just keeping a positive attitude,” said Hill. “But, I’m just glad that I got picked up a little big earlier.”

Playing in a run-heavy offense at Georgia Tech, Hill entered the offseason projected by many as a fourth round pick despite averaging 29.3 yards per reception.

Hill began to grab the attention of scout last February during the NFL Combine, where he ran the 40-yard dash in 4.36 seconds and recorded a vertical leap of 39 1/2 inches.

“Just moving up the boards was just a blessing,” said Hill.

Randle was originally coveted by the Giants in the first round, but the defending Super Bowl champions instead decided to assess their need at running back, selecting David Wilson from Virginia Tech.

With Randle still available at the final pick of the second round, the Giants wasted no time taking the LSU product.

“It’s going to be a real good opportunity for me,” said Randle. “Coming in with a great quarterback like Eli [Manning] and a great receiving core with Victor Cruz and Hakeem Nicks. I’d love to have the opportunity to come in and help those guys out.”

While Randle will catching passes from Manning, he will also spend a portion of the season facing his former teammate.

The Dallas Cowboys selected LSU cornerback Morris Claiborne with the sixth overall pick and there is a good chance he will cover Randle when the two teams play against one another.

Randle, however, wasn’t hesitant to admit who won the battles in practice.

“I would give the edge to myself,” said Randle.

While Randle and Hill did stick around to be able to be present when they were selected, not all of the invitees returned.

Penn State offensive lineman Cordy Glenn did not return to Radio City Music Hall for the second day of the draft. Glenn was selected 41st overall by the Buffalo Bills.

The Jets continued to address the front seven in the third round, selecting Arkansas State linebacker Demario Davis with the 77th overall pick. The Giants selected Virginia Tech cornerback Jayron Hosley with the 94th overall selection.