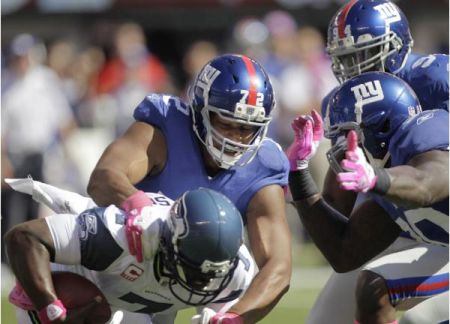 The New York Giants committed five turnovers and Seattle scored 14 unanswered points to close the game as the Seahawks won 36-25.

Eli Manning threw for 420 yards, but also committed four of the Giants (3-2) turnovers, including an interception to Brandon Browner with only 1:08 remaining in the game. Browner returned the interception 94 yards for a touchdown.

Seahawks (2-3) quarterback Tavaris Jackson started the game and threw for 166 yards with one touchdown and one interception, however, he left in the third quarter with a right shoulder injury.

Seattle scored on their opening possession when Jackson found Ben Obomanu on a swing pass for an 11-yard touchdown.

New York quickly responded on the next drive when Manning threw a touchdown pass to Jake Ballard for the second-consecutive game.

Marshawn Lynch propelled the Seahawks for the team’s second touchdown when he ran for a 47-yard run late in the first quarter to the Giants one-yard line. Lynch would score on the next play to put Seattle up 14-7.

Both defenses began to settle down in a mostly scoreless second quarter until Jackson threw a costly interception to Aaron Ross which set up Manning’s second touchdown, a one-handed, 19-yard snare by Hakeem Nicks to tie the game at halftime.

Seattle regained the lead in the third quarter when Anthony Hargrove tackled D.J. Ware in the endzone for a safety.

The Giants would get their first lead of the game in the fourth quarter when Manning connected with Victor Cruz for a 68-yard touchdown. Ahmad Bradshaw successfully converted the two-point conversion to give the Giants a 22-19 edge.

Charlie Whitehurst, however, stepped up in the absence of the injured Jackson and instrumented a fourth quarter comeback with less than five minutes in the game when he capped off a seven play, 80-yard drive with a 27-yard touchdown pass to Doug Baldwin to give Seattle the lead again 29-25. Whitehurst finished the game with 149 passing yards.

With the Giants in the red zone, Manning threw a pass to Cruz, which was tipped off his hands and hauled in by Browner, who returned it 94 yards for the touchdown that finished the Giants.