GENOVESI FAREWELL TO THE FAMOUS FIVE 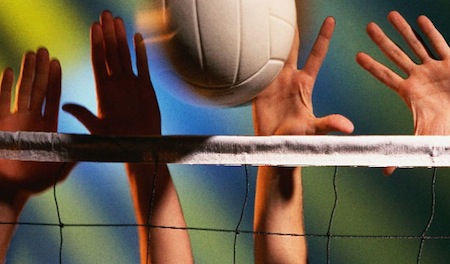 With the help of their teammates, volleyball players Lily Rodriguez, Gina Giles, Maria Kashavelova, Thalita Paladino and Anisa Lila left the Genovesi Center for the last time in the best possible way on Friday night by beating the Central Connecticut State Blue Devils three out of five games.

Before the game Coach Micah Acoba eloquently honored each of the five senior women by relating their many individual achievements which included serving in Iraq, Duns Scotus honors, GPAs all above 3.4, and records in their sport at home and within the NEC.

On hand to honor the fab five were friends and family showering them with flowers, hugs and kisses and the stands were full of students and faculty stomping and shouting and sharing in the excitement.

The games themselves were for the most part well played by the Lady Terriers who with real team workmanship won the first game 27-15, with Thalita leading the charge at the end and Marina Georgieva putting it away.

The second game included some wild plays by our leaping libero Lily and a few good rallies but it was ultimately decided in the favor of the Blue Devils 17-25.

The third game got away from the Terriers within the first few minutes and after a misplay and a suspicious call by the ref the final score was 15-25.

The third and fourth games were in the Terriers’ hands all the way — they were never behind in the third game, winning 25-17 and repeating that feat in the truncated fifth game by a score of 15-8.

While the games played by the Lady Terriers are always important, this night was more about the team and its fans, about the fun from the stands and hopefully the joy the players have in demonstrating their skills.

The evening was special and a bit sad but the fab five and their teammates will prevail in the games remaining. Lily, Gina, Maria, Thalita and Anisa will be missed but not forgotten in the Genovesi Center. Good luck, ladies!