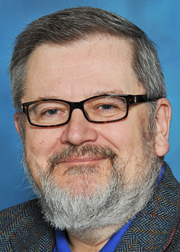 Gerald Galgan has been working at St. Francis College for 46 years and has stuck to teaching what he loves: philosophy.

“Philosophy its search for wisdom, I don’t think I found it yet, but there’s a great joy in searching for it.”

Galgan grew up in Long Island City, Queens in a hard working, middle class, catholic family with a polish decent. His parents strived for him as a kid involving tons of struggles: not having enough money, not having enough time, it’s been a struggle all the way for Galgan.

Galgan looked back at his childhood dreams and said, “As I look back to high school I always wanted to be an engineer, then my great dream was to be a priest, a bigger vision. But then, in the end of college, I finally realized that I wanted to be a professor. The idea of teaching has ultimately a way of knowledge. The best way to know something is to teach it, to see them grow in knowledge”.

Galgan graduated in the class of 1963 of Cathedral College in Brooklyn where his years were full of hard work and companionship.

Besides majoring in philosophy and minoring in English, he met a lot of friends and still keeps in touch with them. He is very thankful for the education he received in Cathedral College.

Dr. Frank Macchiarola, who was former president of St. Francis College, was not only a fellow teacher to Galgan, but was also a friend and a role model.

“I greatly admired his work as a chancellor of the NYC public schools, and at the same time I admired his pursuit of wisdom. I had the great fortune to teach with him, the moral philosophy course, several times” mentioned Galgan. For all these great reasons, he is Galgan’s most important role model.”

Now working with his wife, Wendy Galgan, things are even better. “Working with Mrs. Galgan is Wonderful” said Galgan. They work as a team, sharing many of the same students, mutual projects and teaching courses together.

A goal that Gerald Galgan has set for himself is to teach 3 courses, which include 4 sections, all pertaining philosophy. They are theories in human nature, basic problems in philosophy and the theories of knowledge.

His advice to the students was to “Be courageous, be diligent, be generous, [be] in the pursuit of you’re big dreams. Whatever it is, this college is an important part of fulfilling it, and pursue that with presteligence and generosity”.

APPRECIATE THIS!
A KODAK LIFE FOR HUDAK