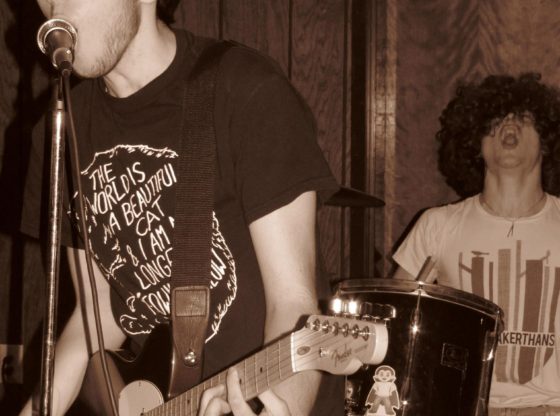 Junior business major at SFC, Rob Rubano, has a lot more on his mind than the average student; he is one of the guitarists and backup vocalists for the Staten Island band, Friday’s Nightmare.

Although Rubano was not an original band member from the formation of the band in early 2009, he has become a vital member.

Rubano has many ideas for the future of Friday’s Nightmare including a summer tour, band merchandise, promotional photo shoots and is very open to other ideas that could get the band noticed.

After seeing Rubano play a solo set billed on the same show, they knew he would be a great addition to the Friday’s Nightmare lineup.

When Rubano’s previous band, August Needs A Holiday, faded out he quickly joined and was adopted by Friday’s Nightmare.

Their latest EP released this March off of Shoreline Records, titled “Songs To Wear Your Peacoat To”.

This seven song EP is filled with low-fi alternative rock tracks that were recorded in a friend’s basement which give it a fuzzy, garage-rock feel.

Though the titles of the songs seem to be less-inspired and more jokey, they offer a different type of sound than your average indie rock track.

The guitar and bass on this EP sound muddled, which lets the listener get a look into the band’s live sound.

The vocals sound a bit theatrical, but it has a British-Pop Rock vibe that meshes with the instruments, including the glockenspiel used throughout the EP.

Some of the best tracks off the EP include: “It’s Unlikely” which has a great baseline and a Vampire Weekend meets Blur sound, supplemented with perfectly pitched vocals, along with “I’m Ashamed Of What I Did For A Klondike Bar” which features a catchy Kaiser Chiefs-like chorus and showcases guitar riffs.

Friday’s Nightmare’s influences include the Arctic Monkeys and Oasis and they plan to continue spreading their music to whomever is willing to listen.

Friday’s Nightmare plays shows mostly at Staten Island venues such as The Cup and Killmeyers but hope to play other venues in Brooklyn and New York City, along with touring in Virginia this summer.

For updates on the band and their new EP coming out soon, follow them on their Facebook page and click here to stream their latest work.