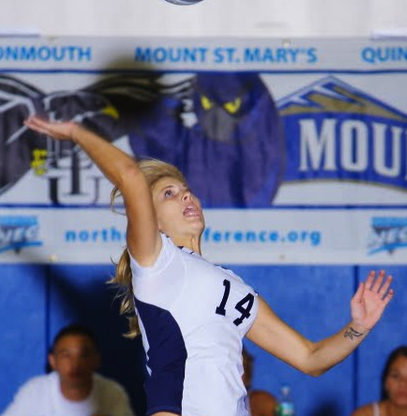 Four student athletes in three sports were name to the Northeast Conference Commissioner’s Honor Roll list on Friday and 13 other athletes were named to the list of Scholar-Athletes for the Fall 2011 semester.

Freshmen Jayma Copeland (Volleyball) and Ronny Schafer (Soccer) joined sophomore John Johannson (Soccer) and junior Mary Gallagher (Cross Country) on the list. In order to qualify, the student-athlete must not only participate with distinction as a member of a Division I team, but they must also have a cumulative grade point average of 3.75.

“The Commissioner’s Honor Roll recognizes NEC student-athletes that achieve excellence in the classroom while successfully completing the physical and emotional rigors of their sport,” said NEC Commissioner Noreen Morris via e-mail. “Congratulations to Mary, John, Ronny and Jayma for their academic accomplishments, earning a minimum of a 3.75 cumulative GPA during the fall semester is a tribute to their continued dedication and commitment to their academic and athletic pursuits.”

In order to qualify for the Fall Academic Honor Roll, a student-athlete must have a grade-point average above 3.20 as well as distinct participation as a member of their respective team. Along with Schafer and Johannson, eight other members of the Men’s Soccer team qualified for the honor roll as well as five members of the volleyball team and a pair of Women’s Cross Country athletes.

“I am very proud of the boys. It is a tremendous honor for St. Francis College and the team,” said head soccer coach Tom Giovatto. “Not only do they give their all on the field they do it in the classroom as well. These players are the true definition of a student-athlete.”

Of the 10 soccer players named to the honor roll, eight of them are not American, including Schafer, who is from Germany and Johannson, who is Swedish.

“The only thing that would change about not being a normal student and being a student-athlete is time management,” said Copeland. “You have to go to practice and then you have to make time in your schedule to do your schoolwork.”

Gallagher was also named to the NEC Commissioner’s Honor Roll last year. The Brooklyn native is majoring in adolescent education.

“To be named to the NEC Commissioner Honor Roll for the past two years feels phenomenal,” said Gallagher. “It goes to show that hard work does not go unnoticed and it inspires me to work even harder. I would like to thank the NEC Conference for this recognition and of course to all those who helped me get here, especially my coaches.”