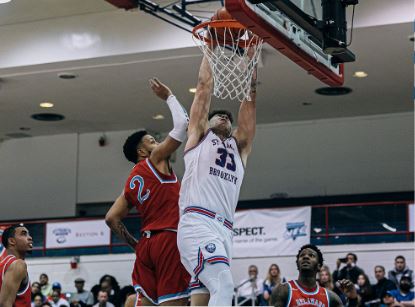 Coming out in the starting five, the 6’8” Ankara, Turkish native, wearing number 33, recorded his first personal foul three minutes into the first half. He was immediately called to the bench by Terriers’ head coach Glenn Braica. Celen later returned to the court at 8:04 where he led the Terriers on a 5-0 run before recording his second personal foul with 6:08 remaining. Pioneers’ Jare’l Spellman was sent to the free-throw line to shoot one. Again, Celen was sentenced to the bench where he would stay until the second half.

In the second half, Celen tallied six points before recording his third personal foul at 10:30. Pioneers’ Koreem Ozier was sent to the free-throw line to shoot two. Before going back to the bench, Celen scored a good jumper to record his 15th point of the contest. Returning to the court, he would record his fourth personal foul at 6:14 sending Pioneers’ E.J. Anosike to the free-throw line to shoot two.

Thereafter, he recorded his last basket of the contest to round up 17 points before recording his fifth personal foul at 3:27 resulting in him being fouled out. Coach Braica was seen questioning the referee from afar in disbelief as he did not see any grounds for the call. Celen himself, as well as fans and his teammates, were also confused about the referee’s call however the contest went on.

In the postgame press conference, coach Braica said: “I thought it hurt us when Deniz fouled out…” Celen played 21 minutes recording a team’s high of 17 points for the afternoon. He also recorded three rebounds, two assists, one steal, scored one of four attempted three-pointers and landed four perfect shots at the free-throw line.

All eyes will be on the Terriers forward in their match-up against the Bryant Bulldogs on Thursday, February 6, at Smithfield Rhode Island. Would he foul out again or would he stand the course? Only time will tell.