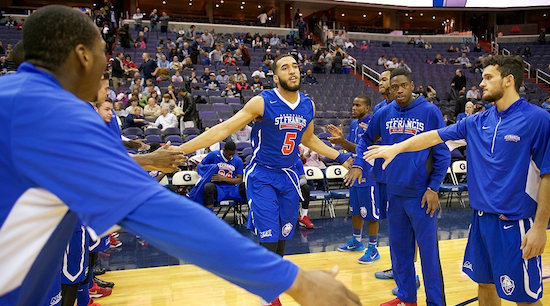 Cannon played an outstanding season with his team, NPC Rieti, with an average of 19 PPG, plus 8 RPG, which earned him not only the title of “center of the year” but also the presence in 1st team honors.

In the last few days, due to the epidemy of coronavirus, every professional basketball league in Italy has been declared concluded, with the titles that remained vacant.

Jalem Cannon is considered an authentic legend in the history of SFC. Basketball Team. He signed with Terriers in December 2010 and graduated in 2015, becoming St. Francis all-time leading scorer, recording a total of 1,720 points, and all-time rebounds leader in Northeast Conference with 1,160 rebounds.

After graduating from St. Francis College, he started his professional career signing with Jefes Fuerzal Lagunera (Mexico LNBP), where he played 20 games with an average of 12.7 PPG and 8.1 RPG (third-best rebounder of the season in the league). He then moved to Hapoel Afula B.C. based in Afula (Israel), and finally to Italy, with Fortitudo Agrigento and NPC Rieti, where he currently plays.

A webinar with Jennifer Demme Harris which, motivates students during a time of uncertainty
Recognition for Rob