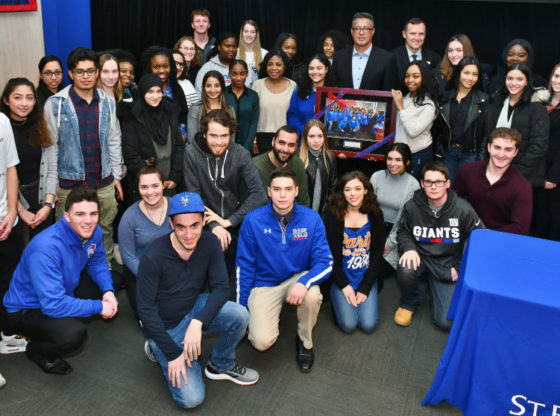 In three years, the program has provided over 60 students with more than $1.3 million in scholarships. The McGuire Fund listed Wilpon and his wife Judy, along with “other generous McGuire Scholarship benefactors” as the backbone to the program’s increasing success.

Ron Darling’s talk at St. Francis College was titled “Livin’ the Dream – Failure, Triumph, Living and Giving Big Dreams.” Darling said that, while all of his on-field accomplishments (including a 1986 World Series championship and a 1989 Golden Glove Award) were great, the best moment for him and his family was when he opened his Yale University acceptance letter.

In an ensuing one-on-one interview conducted by SFCTV’s Danielle Francavilla, Darling claimed that scholarships in general are “the background of education [. . .] at the collegiate level.” He continued by saying that the McGuire Scholarship gives “an opportunity for our young people to change things and make it better.” Darling added that the McGuire Scholarship is highly “spread around” and it has the power to help “so many different people.” Darling ended the night with a special signing for the audience devoted to his book “Game 7, 1986: Failure and Triumph in the Biggest Game of My Life.”