FLINDERS FINDS HER WAY AT SFC 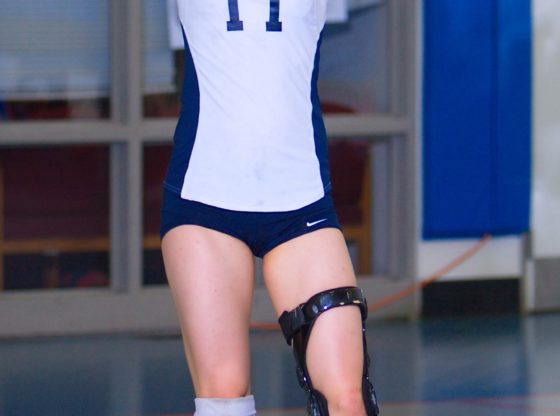 Flinders really enjoyed her years at Western Nebraska Community College and Salt Lake Community College. She loved the community and the level of game play. Flinders started playing volleyball as a setter, and adored it. Although she no longer sets, she still thinks its fun to learn other positions. When she transferred to SFC, she changed positions to outside hitter.

Flinders isn’t about winning or losing. She wants the team to finish these games with the mentality that they played their hardest and had a great game, no matter what the score was. She just wants them to have fun, and step off the court knowing they gave their all and played their hardest. She doesn’t want the team to have regrets after the game.

Flinders is originally from Provo, Utah. She always had dreams of moving to a big city, but now that she is so close to the city, she misses the nature aspect and quietness of Utah which she took advantage of when she was a child. Besides playing volleyball, Flinders likes to go hiking, rock climbing, snowboarding, and boating. But what she enjoys most about being home in Utah are the simple things.

From Utah to NYC, Flinders sees the differences between the Big Apple and Utah. “I like how it’s like so quaint, and there’s all the restaurants and cute shops. Just the vibe in Brooklyn is what I really like.”

Flinders has been a student-athlete since the eighth grade. “I think it helps your focus.” Since you don’t have much free time outside of your sport, you know your free time is school. Flinders’ goals for this year are to graduate and have her degree in her grasp, and keep her love for the game.

Flinders’ plans of being an elementary school teacher were put on the back burner when she transferred to SFC. She decided to change her major to psychology since she had wanted to major in it anyway. Seeing the way the school systems are today really changed her mind on pursuing her teaching dreams.

Now Flinders’ dreams have shifted but the basis is still the same. She wants to teach people. After taking a year off from school due to an ACL surgery, Flinders started doing yoga.

Flinders said, “I love the physical and spiritual aspects combined into one thing.”

She thinks of yoga as a type of counseling since it is so healthy and relaxing. Being a yoga instructor is a career Flinders is looking forward to pursue, not only because it is good for you but because she would enjoy doing going to work everyday. She would also like to coach at some point in the future. So maybe she doesn’t know what she wants to do exactly, but as she said “I feel like life is so open. There are endless possibilities.”

You may not recognize Naomi Flinders during her senior year because she has a short-pixie hair cut, but if you think back to last year, Flinders had dreadlocks. She wanted dreadlocks since high school, but she had no idea what she was getting into. “Dreads are so much work for me, I’m super low-maintenance.” After shaving her head, she looks really different, but the compliments keep rolling in.