FIRST PLACE FDU NEXT TO FACE TERRIERS AT POPE

Home /Sports/FIRST PLACE FDU NEXT TO FACE TERRIERS AT POPE 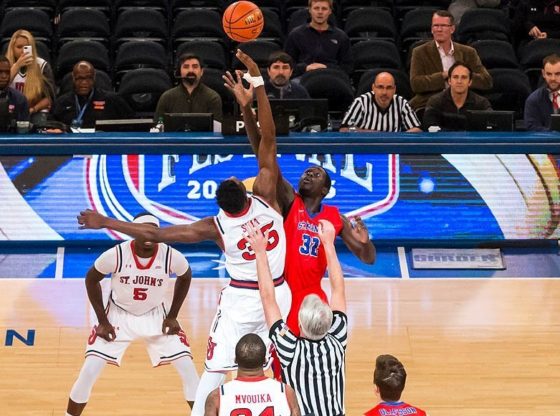 The first place Fairleigh Dickinson Knights (12-10, 8-3 NEC) are in town to take on the hosting St. Francis Brooklyn Terriers (9-15, 5-6 NEC) in a Northeast Conference showdown that’ll shake things up one way or another.

Prior to their narrow four-point loss to the Sacred Heart Pioneers, the Boys from Brooklyn had been victorious in five of their last eight games. In the 74-70 defeat last time out, Terriers’ senior shooting guard Tyreek Jewell poured in a career-high 29 points, and has now averaged 14.5 throughout NEC play.

Senior forward Chris Hooper netted 15 of the Terriers’ 24 bench points, and grabbed six rebounds on the evening. Hooper has averaged 16.5 points and 4.5 rebounds in his last six games, all of which have been in his sixth man role.

The Knights are currently in the midst of a three-game winning streak, and the most recent win came against the Wagner Seahawks, who was also (7-3 NEC) before the game, 82-79 in overtime.

In the OT victory, Earl Potts Jr and Mike Holloway guided the Knights’ victorious efforts. Potts Jr. collected his fourth double-double of the season, recording team-highs in points and rebounds with 22 and 11 respectively. Holloway added a double-double as well, finishing the game with 17 points and 10 rebounds.

The Knights currently trot out the NEC’s best offense, averaging a league-high 77.6 points per game. However, similarly to the Terriers’ most recent opponent, the Knights also have had their fair share of defensive deficiencies, averaging 78.6 points per contest, the second highest mark in the league.

In terms of scoring offense, the Terriers currently rank last in the NEC, putting up 63.6 points per game. As a result of their scrappy play, the Terriers have managed to field one of the leagues best defenses, averaging only 66.3 points per game, second only to Wagner (63.6).

While staying on the defensive side of things, it has been the Terriers who have proved to be the NEC’s most effective team when guarding the paint as they swat a league high 5.0 shots per game.

A big portion of the Knights’ success has come from their superb ball movement, and this is highlighted by the fact that FDU leads the conference in assists per game, dishing out 14.4 dimes per contest.

Additionally, the NEC’s first-place team has been very disruptive on the perimeter, posting a league-best 8.4 steals per game. FDU may need this in order to negate the Terriers’ biggest offensive weapon, which has been their three-point shooting. The Terriers have nailed 7.4 three-point shots per contest, a league-high thus far in the season.

Earlier this season to open-up NEC action, the Knights and Terriers faced-off in Teaneck, New Jersey, home FDU. On the January 2 affair, the Knights outlasted the Terriers 86-77 in what was an absolute track meet from beginning-to-end.

Hooper collected a team-high 19 points, and he also pulled down six rebounds in 19 minutes of action. Jewell chipped in 14 points, grabbed four rebounds, and dished out four assists in the game. Terriers’ senior forward Amdy Fall had one of his best games of the season; 15 pints, 10 rebounds and seven blocks.

The Terriers will look to even the score against the NEC-leading Knights on Saturday afternoon at 4 p.m. live from The Pope and NEC Front Row.