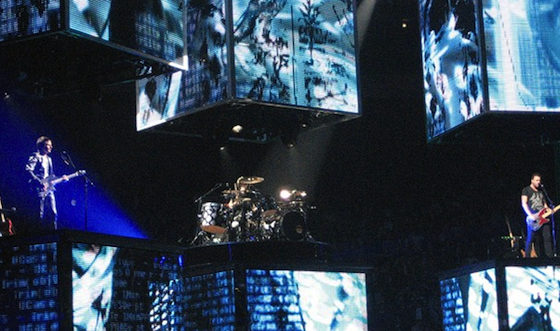 I had never attended a concert before this. So when I bought floor seats for my favorite band MUSE, who were to play at Madison Square Garden, I squealed with joy and anticipation for the day to come.

My heart was pounding. I couldn’t believe that I would get to see lead vocalist Matt Bellamy, drummer Dominic Howard and bassist Chris Wolstenholme live.

Of course I arrived at the venue fashionably late with my sister and two friends due to our incredible sense of direction and superb sense of time.

As we walked down the stairs and sat in our seats we got a chance to listen to some of the songs from the opening act. They were called Silversun Pickups. I’ve never heard of them before that day but they rocked out!

After Silversun Pickups finished playing, the lights went up in the stadium, and showed the whole arena. It was unbelievably huge and I couldn’t believe that every seat in the house was already filled.

Everyone was waiting patiently for MUSE to go on stage and suddenly the lights went out and three columns on stage lit up to show stairs with rows of people lit up.

The rows of people began to march forward up the stairs and when the illuminated silhouettes started to fall and shatter onto the ground you knew something was coming. That’s when the curtains over the three columns were ripped away to reveal MUSE.

MUSE started their incredible concert with their title song from their latest album Uprising. I was jumping up and down, screaming along the lyrics causing my friends to look at me as if I was clinically insane. Later on they played my favorite songs such as Map of the Problematic, Supermassive Blackhole, Feeling Good and Starlight.

But the highlight for me was when MUSE sang their famous song Time is Running Out. As they began to sing the chorus I slowly realized that it wasn’t MUSE who were singing, it was the whole room singing the one tune to one song in one voice. That feeling of being connected to a random stranger over a song was a feeling I’ve never felt before nor will feel again.

YOU GOT GAME?
CONEY ISLAND RIDES THE NOSTALGIA WAVE