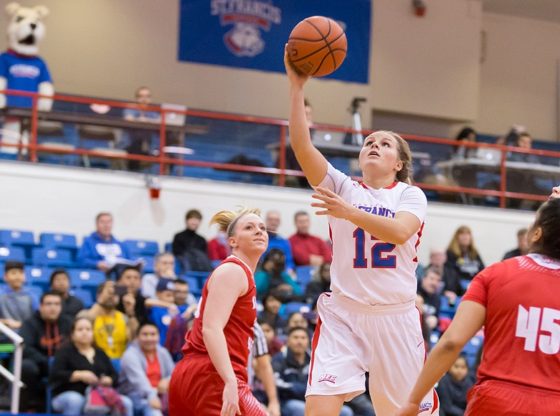 The Terriers had a strong beginning tonight following Fechko’s game-starting three-pointer. It wasn’t until PA’s redshirt sophomore center Cydney Smith made a three-pointer with 5:23 left in the first quarter that the home team took the lead and the Brooklyn girls began struggling.

After leading 9-8, the Red Flash went on a scoring spree as the Terriers had trouble making field goals. The Terriers didn’t score a single point during the last three minutes of the first quarter and trailed their opponent 12-26 at the buzzer.

Neither team could make a shot at the beginning of the second quarter. The first points came when Terriers sophomore guard Blair Arthur made two free throws almost a minute in.

The Terriers kept up with their opponent on scoring in the second quarter. They gained 17 points – edging the Red Flash’s 19-point gain – but were too far behind for it to make much of an impact.

The Terriers shot 6-for-6 from the foul line and made 18 rebounds – two more than the Red Flash – during the first half.

Fechko had already made it into the double digits with 11 points and Derda – who fit in a jumper in the last two seconds of the half – had already accumulated six points.

Despite their hard work, the Terriers trailed 29-45 at halftime.

The Terriers continued their strong gameplay after returning from halftime. They advanced by a lot of points in the third quarter — again almost as much as the home team – but couldn’t stop them from scoring and were basically stuck in the same spot as they were in for most of the first half.

The Terriers did as much as they could in the last ten minutes, but the Red Flash were able to keep them scoreless for long periods of time.

Despite the Terriers’ lack of scoring from the field, they had a lot of opportunities to score with free throws and made most of them.

However, the Terriers were stronger on rebounding – racking up 43 while their opponent only managed 28.

But a major contributing factor to PA’s win was their 16 steals, while Brooklyn only stole the ball three times.

In addition to her career-high scoring, Fechko recorded seven rebounds and three assists for the Terriers. Derda – who only averages 4.8 points per game — accumulated nine rebounds while tying her scoring record.

The Terriers will host their last two games of the season against the Mount St. Mary’s Maryland Mountaineers on Saturday and the Central Connecticut State Blue Devils on Monday.