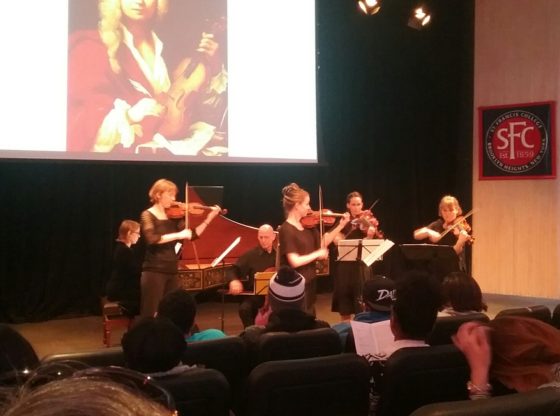 When people hear of St. Francis College, they often think about it’s location in Brooklyn heights or it’s great classes. Yet everybody needs a break from the busy city and career building, that’s also something you can find here by taking time to listen to classical music from some famous musicians at some of the concerts held by The Department of Fine Arts at St. Francis College.

The first concert took place September 26, 2016 during activity period in Founders Hall the students and guests could be see lining up in waits to listen to Keyboard Music titled Renaissance and Barogue starring Rebecca Pechefsky playing the harpsichord and the virginal. She has performed in many world-renowned venues and isn’t a stranger to performing at SFC.

The concert opening with “Prelude and Fugue in B Minor, BWV 893 The Well-Tempered Clavier Book 2” by none other than Johann Sebastian Bach. The concert continued after a small speech from the performer going on to play “Robin” by John Mundy, “Pavana Bray” by William Byrd, “Piper’s Galliard” by John Dowland, “Toccata Prima” and then “Canzona Quarta” by Girolamo Frescobaldi and followed by a large block by one composer. This section is “Huitieme Ordre” by Francois Couperin consisting of La Raphaele, Allemande L’Ausoniene, Courante, Sarabande L’Unique and Rondeau. Lastly the final pieces of the afternoon were “Sonata in F Major, R. 76” and “Sonata in A Minor, R. 118” composed by Antonio Soler. The performance lasted about an hour and was meet by great applause by both students and outside attendees.

The second concert took place on October 24, 2016 at 12:30 pm in Founders Hall. This concert starred Joao Kouyoumdjian who created guitar transcriptions for pieces that were written for instruments like the cello and violin. Kouyoumdjian is a Brazilian-born classical guitarist who won the XXI Souza Lima National Guitar Competition in São Paulo, Brazil in 2010 and has been steadily performing globally for years.

The concert consisted of musical pieces all composed by Johann Sebastian Bach. It opened with the piece “Air for Orchestral Suite No. 3 in D Major, BWV 1068,” followed by “Cello Suite No.1 in G Major BMV 1007.” The Final piece he played was “Violin Sonata No. 2 in A Minor, BWV 1003.” This concert was especially interesting considering none of these pieces were meant to be played on guitar.

The final concert of the semester was titled Antonio Vivaldi: Concertos and Sonatas” which took place November 14, 2016 at 12:30 pm in Founders Hall. This starred members of Brooklyn Baroque featuring Rebecca Pechefsky on harpsichord once again, David Bakamjian on cello, Kristina Giles on viola & violin, and Tatiana Daubek, Amelia Roosevelt and Theresa Salomon playing violins. Brooklyn Baroque performs frequently around New York and is the ensemble-in-residence at the eighteenth-century Morris-Jumel Mansion.

These were the performances St. Francis College held for students and guests alike. The Department of Fine Arts at St. Francis College is always having musical events, so don’t to miss out on unique concerts like these! Not only do they feature famous musicians, but they are very relaxing and a nice change from the usual day of stressful work.