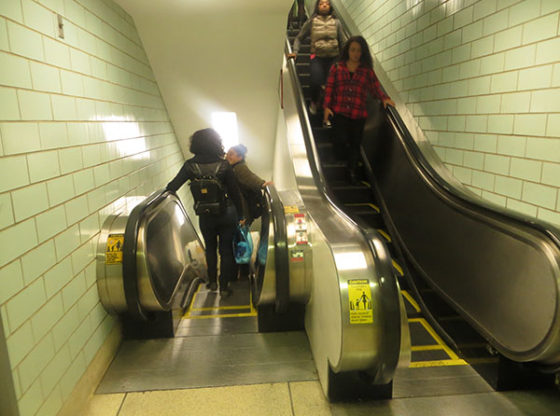 The reason the escalators at St. Francis College are constantly turning off and on is because of its safety signals, something that cannot be solved, Provost Timothy Houlihan said.

“If one of these is triggered, it brings the escalator to a stop,” Houlihan told SFC Today.

The Provost encouraged everyone to be extra cautious while using the escalators and make sure they hold on to the hand rails.

They have been stopping and starting for years, forcing 3,000 students, faculty and staff to walk up them, cram into the elevator or take the stairs in order to navigate the eight floor building. The stoppage causes jams on the escalator wells, which can result in students and professors being late to class.

“When the escalators don’t work, we’re forced to take the elevator,” senior Brianna Faraj said. “This leads to crowded elevators, therefore we have to wait for the elevators, leading myself and numerous other people to be late for class.”

Earlier in the semester the problem became more than just an inconvenience when a student was injured on the down escalator between the first and second floor. It abruptly stopped and the student tumbled down, suffering a wound to the face which bled profusely, witnesses told SFC Today.

“I was right by the escalator when I heard someone scream ‘Help Me! Help! Someone help me!'” sophomore Ilyas Raymond said.

The victim was lying down at the bottom of the escalator, conscious but not moving, with blood streaming from a deep gash in his face, another witness said. An ambulance then arrived and he was carried out on a stretcher, Raymond said.

“His face was pale,” Raymond said. “He looked like he was in shock.”

It is not known if the injured student — who declined to comment — will seek legal action.

The escalators passed inspection with city officials, an independent inspector and the college’s maintenance company in August. The company and city inspectors returned immediately after the incident and found that the escalators were still in accordance with city codes, Houlihan said.

“It did not require repairs,” Houlihan told SFC Today. “… St. Francis prides itself on maintaining a safe and secure environment for all students. The last thing we want is for someone to get hurt inside the building.”

Three weeks after the incident, senior Brian Leary was taking the escalator when it stopped again and a student behind him jerked forward and caught himself by grabbing the hand rails.

“I do think the escalators are dangerous,” Leary told SFC Today. “After the incident a few weeks ago I thought it would be safe to assume the school would remedy the issue, but it’s evident that’s not the case.”
The college needs to figure out a way to fix the issue before someone else gets hurt, Leary added.

Junior Francesca Paparone also once took a fall as a result of the escalator suddenly stopping.

“I fell down three stairs and dropped my bag,” Paparone said. “Fortunately I didn’t get hurt.”

The fact that the safety devices are causing people to trip and fall is confusing, sophomore Charles Brucia said.

Junior John Mulvihill said he was glad the school’s escalators have passed inspection, but that this will have little affect on their reputation among students.

“The escalators are still notorious among students for a reason,” Mulvihill said. “That reason being they stop so often.”

SFC SPOTLIGHT: THE JOURNEY OF SENIOR WALK-ON MILES ROCKAFELER
STUDENTS PROTEST OVER CAMPUS RACISM AT THE UNIVERSITY OF MISSOURI