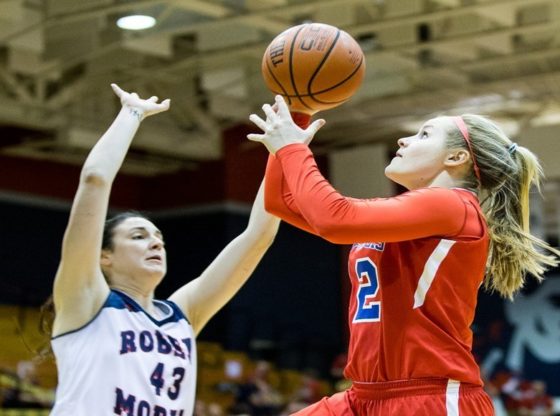 In their last outing, which mathematically eliminated them from playoff contention, the Terriers lost to a stingy Mount Saint Mary’s squad, 57-40 on Senior Day. Before the game, the Terriers had won three-of-five contests, and were playing their best basketball of the tough 2015-16 season.

Central Connecticut State is coming off a 71-59 win over Fairleigh Dickinson, which came after dropping two consecutive home games to lower-ranked opponents.

In the game, the Terriers will send-off two of their beloved seniors, Taylor Watson and Leah Fechko. Watson, a co-captain, has appeared in 14 contests, and posted a career-high eight points earlier this season in a home loss against Bryant University.

Watson has been a mainstay for the team over the course of her four years at SFC, and is looking to save her best for last with Central in town.

Fechko has led the team in many statistical categories all season long, and currently ranks amongst the Northeast Conference’s elite in most instances. With 15.2 points, 8.6 rebounds, 3.6 assists, and 2.5 steals per game, Fechko has established herself as one of the NEC’s top all-around performers this season.

On the other side of the spectrum, sophomore guard Camden Musgrave has led the Blue Devils with a team-high 10.6 points per game, which places her 15th in the NEC. Junior guard Aleah Epps follows with 9.4 points and a team-best 3.0 assists per game.

Another standout Blue Devil has been senior forward Tejahne Malone, who averages 9.3 points heading into Monday night’s affair. The Maryland native has also established herself as one of the best rebounders in the land by pulling down 7.3 boards per contest, which is the eighth highest clip in the NEC.

The Terriers and Blue Devils will tip-off at 7 p.m. live from The Pope P.E. Center. Action will be streamed live on necfrontrow.com as the Terriers will look to send-off two incredible seniors, on and off the court, in style.