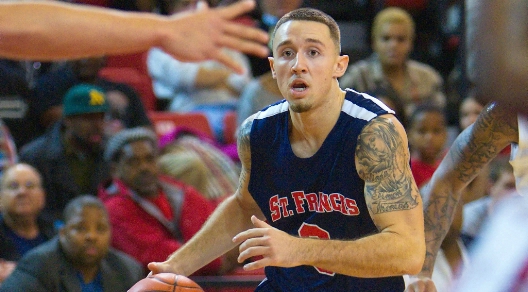 Men’s Basketball: Terriers drop their third game in a row with tonight’s 73-71 loss to the Central Connecticut State Blue Devils.

Final: In what was a back and forth affair all game long it seemed as if the team who had the ball last would win the game. That was the case tonight for the Central Connecticut State Blue Devils as they knocked off the Terriers 73-71 on a last second three pointer by Junior guard Kyle Vinales.

Vinales was the star of the night for the Blue Devils as he scored a game high 23 points on 7-17 shooting from the field. He was 4-8 from three including the game winner and he was perfect from the free throw line. The Terriers seemed to have him bottled up on that final play but Vinales was still able to come through and sink what would be the game winning three.

“It was a great game, their kid hit a big time shot to beat us.” Terriers head coach Glenn Braica commenting on tonight’s tough game and the game winning shot by Kyle Vinales.

For the Terriers this is a devastating loss as they were coming off back to back loses at the hands of Robert Morris and LIU Brooklyn. They needed to have this one tonight but the Blue Devils were just able to snatch it from them.

The Terriers were led by Senior guard Ben Mockford who scored a team high 18 points, on 6-10 shooting. He was 6-9 from behind the arc as he had the hot hand early on for the Terriers. Mockford did the bulk of his scoring in the first half where he scored 12 points. He only managed to score 6 points in the second half as it was clear the Blue Devils made it their number one priority to shut him down.

Junior forward Jalen Cannon was able to put together a double-double this evening. Cannon scored 16 points and grabbed a game high of 12 rebounds.

Junior guard Brent Jones had an up and down game. He scored 13 points and was able to dish out 6 assists, but he turned the ball over a total of 6 times which is a glaring stat since he has been so good with ball security all season long.

Turnovers plagued the Terriers on this night, Jones was not the only one who had problems controlling the ball. They turned the ball over a total of 18 times as a team, which is way too many for any team to have on any given night. The Blue Devils capitalized on the Terriers sloppy play with the ball, they scored 21 points off turnovers which very much could have been the difference in the game.

“I thought we turned the ball over a little too much, but other then that we gave a good effort, it was a very good game and they came out on top.” Terriers head coach Glenn Braica commenting on tonight’s game.

The Terriers offense looked good tonight despite their trouble with turnovers. Every player who played this evening scored a point which shows a nice example of ball distribution. As a team the Terriers shot 45.5% from the field and 54.5% from three. The problem area was free throw shooting, the Terriers left some points at the line tonight especially late. They shot 9-15 as a team which is only 60%, free throws and turnovers can either help or hurt a team and we saw tonight what end the Terriers were on of that spectrum.

This was a huge win for the Blue Devils as they are fighting to get into the NEC tournament. They are now (9-16, 5-7 NEC) and are in 7th place. They have played a much better brand of basketball since their top scorer Kyle Vinales returned from injury as they are now on a three game winning streak.

Vinales was the hero on this night but he did have some help. Junior forward Faronte Drakeford had a solid first half scoring 8 points, but he was held scoreless in the second half and fouled out. Sophomore forward Brandon Peel had a very solid night scoring 10 points and pulled down 8 rebounds.

There are now only four games remaining for the Terriers until the postseason begins. They will have little time to think about this loss because they are back in action on Thursday when they take on the St. Francis U Red Flash on the road in what will be another tough game.

Halftime: After a hard fought game on Sunday where the Terriers lost to LIU Brooklyn, we have seen them come out tonight playing aggressive looking to right the ship with a win over the Central Connecticut State Blue Devils.

The Terriers have been led by Senior guard Ben Mockford who has been lighting up here in the first half. Mockford has scored 12 points on 4-5 shooting from three. He has found the range early tonight, knocking down his first four shots from three. He has been able to come off screens and get good looks at the basket, the Terriers must look for him throughout the second half because he is feeling it tonight.

Every Terrier except one has scored here in the first half. Junior forward Jalen Cannon scored 7 points and has pulled down a total of 9 rebounds, four of which have been offensive. The Terriers floor general Junior guard Brent Jones has had a solid first half as well scoring 6 points, with 3 assists. He has turned the ball over 4 times, look for Jones to limit the turnovers in the second half.

Freshman guard Yunus Hopkinson has played some quality minutes in the first half off the bench he only scored 2 points and dished out 3 assists, but he has brought energy and hustle to the floor. The Terriers must keep up the tempo and limit the Blue Devils from getting easy fastbreak points.

The Blue Devils have been led by Junior guard Kyle Vinales who have burned them so far off the bench. Vinales has a game high 14 points on 5-9 shooting, he is also 3-4 from three. Vinales also has 3 assists and 3 steals, to go along with his 14 points.

Junior forward Faronte Drakeford has had a solid first half as well scoring 8 points. The Terriers must slow these two guys down. They are the Blue Devils’ top guns and there needs to be a more conscious effort made to shut them down, especially Vinales.