El Mahdi Youssoufi – the man from Morocco lighting up the league

Home /News, Sports/El Mahdi Youssoufi – the man from Morocco lighting up the league 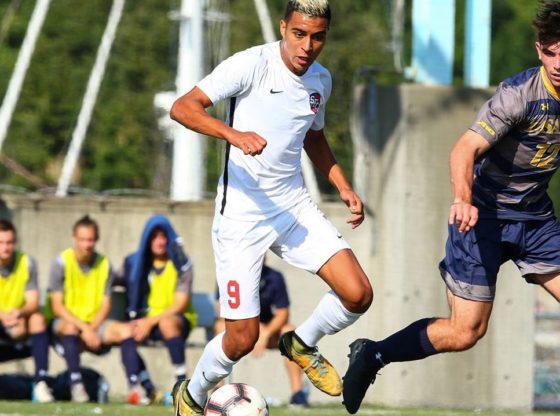 El Mahdi Youssoufi is the man of the moment, the name on everyone’s lips.

The new striker for the St. Francis College men’s soccer team was recently named NEC Men’s Soccer Player and Rookie of the Week, while his bicycle kick goal scored against CCSU was featured on ESPN SportsCenter’s Top 10 as the #7 of the day.

He has scored five goals already this season, but throughout our chat discussing his background and the dream he is living in New York City, Youssoufi never spoke about his success so far as a personal thing.

He encompasses his teammates, friends, and all the people at St. Francis College that are helping him make that dream come true.

“I come from Morocco … I moved this year and everything is completely new for me,” said Youssoufi.

“I had many offers, from different universities, but after a conversation with coach Tom Giovatto I thought that St. Francis was the best choice for me.

“And, of course, living in New York City is amazing.”

Was it difficult for him to settle in?

“Things are very different from Morocco, it’s not easy, but I am adapting well.

“Here, I found a wonderful environment … they are all helping me to get used to everything.”

The conversation turned to the immediate impact he has made at St. Francis College.

“I came here full of motivations, but, as I said before, it’s a new life for me.

“I thought that I needed time: six months, maybe one year, to get into the rhythm.

“Instead, everything arrived so quickly, but nothing would have happened without the support of my teammates …

“The bicycle kick goal? I practiced it a lot back in Morocco.

“I also scored some goals but never like that.

“I think it’s not just the bicycle kick in itself, but the entire action: perfectly playing one touch, then the perfect cross came in, and I scored.”

“It’s fantastic. Making my friends, my family, my school proud of me is an amazing feeling.”

The first thing that you notice when you see El Mahdi playing is that you can find him anywhere in the field.

A way of playing devoted to sacrifice and commitment, at the service of the team.

“I like running and making pressure on the defender; that’s my style.”

When asked about his favorite player, Youssoufi has no doubt.

“He may not have the same talent as Messi, but the hard work and sacrifice that he puts in what he does are my first inspiration …

“And not just for me, I think he represents an example for every athlete, no matter what sport he is playing.”

“I have two: Liverpool and Real Madrid.”

Soccer is the present for Youssoufi, but what about the future?

“Soccer is my passion, my dream. It’s an important part of my life.

“I am also studying Physical Education here at St. Francis College, so maybe I will be able to become a coach once I quit playing.”

We closed our chat talking about his aims for the season.

“The goal is to win the conference.

“Let’s get to the playoff and see what happens.

“We have all the possibilities to do that.”

Terriers fall to Saint Francis (PA) in the “Battle of the Franciscans”
Women’s Volleyball Wins SFC vs SFU: 3-0