EHS DORMS: A HOME AWAY FROM HOME?

Home /News/EHS DORMS: A HOME AWAY FROM HOME? 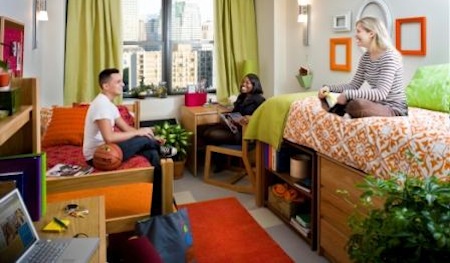 While the history of Educational Housing Services (EHS) and its literal rise from the ashes of the St. George Hotel is interesting, are the St. Francis College dorms “a home away from home”?

Student, Micah Haywood works at the EHS’ reception desk. He said that, “it is the best place to room while in college.” Haywood has lived there for four years, and also works for the Educational Housing Services.
Brian Harrington, resident assistant (R.A.) conducted a tour of the lower floor. He substantiated Mr. Haywood’s opinion. Within the housing complex, there is a brand new, very attractive, modern kitchen open until midnight. The kitchen also includes an area of tables and chairs for dining.

In addition to an attractive kitchen, there is a lounge area with a pool table and fireplace; study rooms, and a “snack area” is open around the clock, 24/7.

What are three key words students used to describe the dorms? Convenience, safety, and comfort.

Although, some students felt that the campus was inconvenient, other students gabbed about the eight minute walk from the campus.

Lily Rodriquez, former resident, response to safety: “thanks for 24 hour security and a strict guest sign-in policy, I definitely felt safe at EHS.”

Most students seemed to be comfortable. However, Lily Rodriquez explained how she did not feel comfortable sharing a communal kitchen.

In response to a communal kitchen, Lily Rodriquez said: “this results in residents having to lug kitchen utensils back and forth.” The new kitchen does not eliminate that problem but Mr. Harrington said “it is a much nicer, prettier option.”

At one point, kitchens were scattered throughout the buildings. Mr. Harrington said “they were equally accessible to all residents.” In an attempt to keep kitchen areas cleaner, he said “Now, there is a larger communal kitchen on the first floor.”

Lily Rodriguez now shares an apartment with friends. She said, “the dorms are way too overpriced … the prices aren’t worth what EHS provides.” She is in a position to compare apartment prices with the EHS prices.

Dr. Cheryl Howell is the Dean of Students who oversees off campus housing for St. Francis College students. On site at EHS are four St. Francis College R.A.s (Resident Assistants) who report to both SFC and EHS. Their responsibilities include: reporting all issues and problems students may have.

Dean Howell addressed the issue of the seemingly high price of EHS and said, “The key to living at EHS is particularly important to new students coming alone to St. Francis from around the world.”

On another note, Howell said: “it adds the St. Francis presence to Brooklyn Heights” and makes the student feel as though apart of a community.

She continues “Since these students usually do not arrive with friends, it is important to have a facility such as EHS in which to ‘meet and greet’ other students and become familiar with the area around SFC.” Once they are more established, often students search for an apartment with a friend or two – rents in the Brooklyn Heights area are not cheap.

Years ago, according to Dean Howell, “student-athletes were domiciled at Poly Tech and they became the forerunners of SFC students at EHS.” This original group “supplied the core of information setting up future housing for SFC students.”

Currently there are 106 SFC students living at EHS. It is no longer only for athletes but the general student population as well.

Other than the communal areas mentioned above, the EHS brochure promises and delivers a 24-hour laundry room with washers/dryers. In addition, students are provided with amenities such as private baths, micro-waves, refrigerators and TV/DVD combos in each room.

EHS is located in the old St. George Hotel on Clark Street. The hotel has been a showplace of Brooklyn Heights for many years.

The Clark Street side was nearly destroyed by a fire in the early 1990s. It was set by a fellow using a torch to extract copper fixtures; it remained a water soaked hulk until EHS took over. This section of the building is now known as the Clark Street Residence; it has recently had extensive renovations.

The Clark Street Residence connects to the St. George Weller and the Studio Building. In addition, the residence occupies the second floor of the formerly renovated St. George Hotel in 2006.

A more recent renovation was in the student lounge. The lounge is a place that brings not only SFC students but students from other colleges (Pace, FIT, and Polytechnic).

Dormers are also permitted to use the facilities at the gym Eastern Athletic Club located one-half of a block away on the corner of Clark and Hicks Streets.

It would appear that EHS is an excellent starting point for St. Francis College students arriving for the first time in New York City. Once established, the student can always search and often find suitable apartments in the area.

For the convenience, safety, and comfort, EHS appears to be an excellent home away from home.