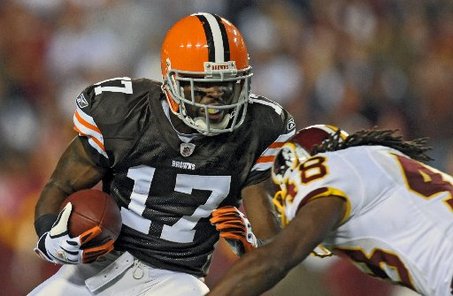 On a recent morning, disgruntled Cleveland Browns wide receiver Braylon Edwards dressed up expecting a normal day of practice drills. However, this was before Cleveland coach Eric Mangini had informed him that he was now the newest member of the New York Jets.

The Browns’ front office had given up the third overall pick of the 2005 NFL draft by shipping him off for arguably mediocre players Chansi Stuckey, Jason Trusnik, and two conditional draft picks.

Edwards did not take long to wear out his welcome with new Browns head coach Mangini, who has a track record for a no-nonsense policy when it comes to players who get into trouble off the field.

The Cleveland Browns are currently 0-4, and they have many holes to fill on both offense and defense; this is where extra draft picks come in handy.

The New York Jets receiving core before the Edwards trade was average at best. When Jerricho Cotchery started the season as the number one receiver on their depth chart, many experts had written them off as a legitimate threat to win the AFC East division. Nevertheless, the Jets have made up for it doing this midseason trade.

In 2007, Edwards showcased his talent as a wide receiver by catching 80 balls for 1,289 yards and scoring 16 touchdowns. However, in 2008 his production dropped off immensely — he led the league with 16 dropped passes and had only 3 touchdowns.

Damon Sims of cleveland.com believes this decline was because, “he sabotaged his own 2008 season when he ran laps in his socks and teammate Donte Stallworth gashed Edwards’ foot with his cleats.”

Thus, Edwards has been labeled as a player with character issues. In November 2008, he was fined $150 and given 30 hours of community service for driving 120 miles per hour through a small Ohio town. Edwards also lashed out at Browns fans who criticized his poor 2008 performance because he had played football at the Ohio State arch-rival school, the University of Michigan.

Most recently, the NFL is currently investigating whether Edwards violated the league conduct policy following allegations that he punched a friend of NBA star LeBron James after an argument in downtown Cleveland.

While Edwards is not quite the once in a generation talent like Randy Moss or Terrell Owens, he will have an immediate impact for Gang Green.

Edwards still has a 4.40 time in the 40 yard dash, where he can stretch the field and pull double teams away from Dustin Keller and Jerricho Cotchery.

Standing at 6’3’’, he also gives rookie quarterback Mark Sanchez a red zone threat to throw to and to distract the opposing defense from the running game as well.

When Edwards first entered the Jets locker room he was greeted with traditional hazing with a pair of boxing gloves and a picture of LeBron James in his locker.

In an interview with NY Times writer William C. Rhoden, he seemed to look forward to having a fresh start playing for the New York Jets: “It feels great,” he said. “I’ve always loved New York since the first time I came here. It’s a great town, and obviously what’s going on here with the Jets and Coach [Rex] Ryan, they’re doing a great thing so far. To be a part of that feels good.”

AYENI BOUNCES BACK STRONGER THAN EVER
SO YOU THINK YOU CAN DANCE? JOIN THE TEAM