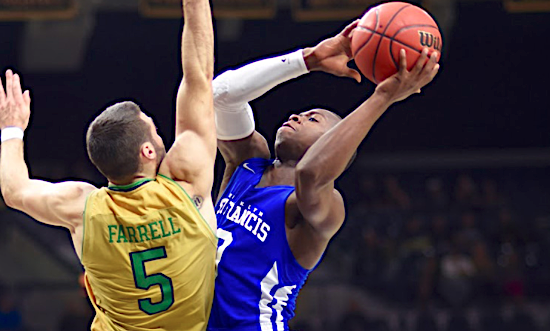 Dunn hit four 3-pointers and added seven rebounds, five assists and three steals for the Terriers (12-15, 9-6 Northeast Conference), who moved past LIU Brooklyn (13-20, 8-7) into a four-way tie for second place in the conference.

St. Francis is joined in the second-place tie by Mount Saint Mary’s, Saint Francis U and Robert Morris with just three games remaining in the regular season.

St. Francis will now host FDU on Saturday at 4pm.

The Associated Press reported that after back-to-back layups by Joel Hernandez gave LIU Brooklyn a 74-73 lead, Dunn answered with a layup to regain the lead for good for the Terriers with 3:16 left to play.

Milija Cosic and Jordan added baskets in a 6-0 run to push the Terriers’ lead to 79-74 with 2:11 left to play and Jordan and Dunn took care of business at the free-throw line to seal the Battle of Brooklyn.