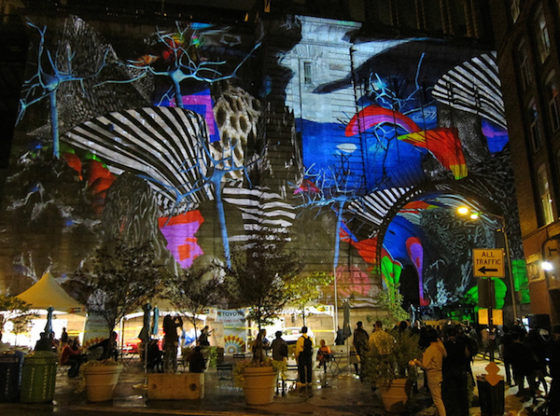 The 18-year-old annual DUMBO Arts Festival, which attracts artists and tourists from around the world every year, will not return in 2015 because it has become too large and requires additional funding.

The festival took place on the streets of DUMBO for three days every September and included studio exhibits, street performances, and children’s events. It drew in more than 220,000 people last year.

In order for the festival to continue, Two Trees Funding, the real estate firm that ran it, would have had to get funding from corporate sponsors, which it did not want to do because the original mission was to showcase local artists.

“It became clear that we could no longer mount the festival ourselves without commercializing it in a way that didn’t feel right,” festival director Lisa Kim said. “We were getting too far from the original mission of the festival.”

Kim said the festival displayed unique art for the many visitors it had every year.

“We worked to showcase extraordinary art from a growing list of local and international artists,” she said. “We’ve had an incredible run and brought beautiful moments of art to a huge audience.”

Brooklyn Borough President Eric Adams is trying to persuade the organizers to continue running the event.

“The DUMBO Arts Festival grew from humble beginnings into an internationally recognized celebration of creativity and community,” Adams said. “Our borough does not want to lose this magnetic event, which has introduced hundreds of thousands of visitors to Brooklyn’s waterfront.”

Adams plans on speaking with festival organizers, local artists, businesses, and corporate funders to discuss a way to keep the event running.

The organizers usually start their first planning phase in February or March.

Artists Joy Glidden and Tyson Daugherty started the fair as the “Art Under the Bridge Festival” in 1997 to try to attract people to DUMBO, which was mainly an industrial area at the time. In its first year there were 8,000 visitors.

Glidden and Daugherty ran the festival until the DUMBO Arts Center took over in 2006. The center stepped down in 2009 because they could not handle such a big event.

Two Trees Management stepped in and ran the event for the next five years. The firm will now focus on smaller events featuring neighborhood artists.

HISTORY HAILS FROM THE BRONX
CANVAS HAS GOT YOU COVERED