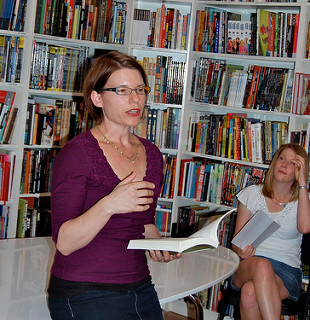 St. Francis College Literary Prize winner Maud Casey loves life as an author so much that she doesn’t mind the obstacles it brings her.

The author won the $50,000 annual prize last weekend for her fourth novel The Man Who Walked Away.

Published in 2014 – it is based on a true story and follows a character named Albert who travels from country to country in his sleep and winds up seeing a doctor about the condition, who he builds an intimate relationship with.

“Honestly, this all feels like a dream,” Casey told SFC Today. “A really, really lovely dream.”

It was an honor for her just to be one of the six finalists because she admires the work of the other five writers — Paul Beatty, Stuart Dybek, David Gilbert, Marlon James and René Steinke.

She was surprised when she became a finalist and didn’t expect to win, Casey added.

SFC awards the prize at the Brooklyn Book Festival each year to a mid-career author for their third to fifth published book. The winner is picked by a panel of three jurors.

“Casey’s writing struck us for the quality of its sentences, by turns lyrical and hardnosed, the depth of its research and its subtly intricate structure,” juror and author Daniel Torday said.

The novel was inspired by the unsolved diagnosis of a French man who wandered through Europe in a semi-trance state during the 19th century, not remembering his journey to each country.

The story stayed with Casey long after she read about it, she said.

“The mystery of it compelled me to write a novel,” Casey told SFC Today.

Casey was also fascinated by the relationship between the doctor and patient in which they each helped each other out.

Although her novel was a success, Casey admitted to struggling with it as well has all her previous books because she is a slow writer.

“I’m a really slow writer to begin with and it takes me a long time to figure out what I’m doing,” she said.

She always has to experiment and makes mistakes along the way, Casey added.

This doesn’t stop her from enjoying the career she always dreamed of.

“I feel lucky to be able to do something I always wanted to do,” she said.

Casey feels fortunate to teach creative writing to undergraduate and graduate students at the University of Maryland, College Park.

One of the most interesting things about teaching fiction at the college level is that the students take risks that lead them to unexpected places, Casey said.

“It’s a thrill to be in a classroom full of people who delight in making things up, who value imagination,” she said.

Casey also wrote The Shape of Things to Come, Geneology: A Novel and Drastic.

All four of her novels are about characters who are going through some type of crisis.

Her father is author John Casey, who wrote Spartina, a novel about a former commercial fisherman who takes an immense risk to finish the half built boat that has been sitting in his yard for years. It won him the 1989 National Book Award.

Casey will continue living her dream as an author and creative writing professor.