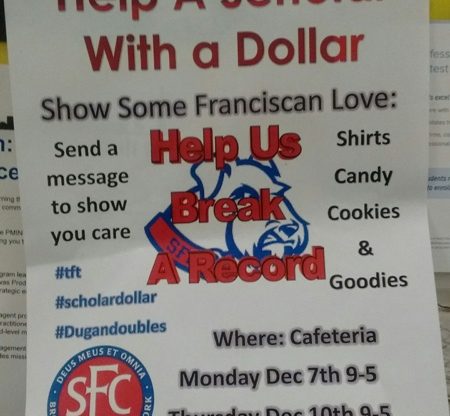 Dr. Michele Hirsch’s psychology class will hold a fundraiser during the upcoming week that will aim to pay for a student’s pilgrimage to Assisi and contribute to a scholarship fund for students at St. Francis College.

The students in Psychology Seminar: Propaganda and Persuasion are required to complete a project that demonstrates propaganda and persuasion techniques and decided to do one that raises money for a good cause.

The eight-student class will set up a table in the cafeteria on Monday, December 7 and Thursday, December 10. They are hoping to set the record for most money raised by a student group in one day.

Half the money will go towards bringing back a scholarship that previously funded the education of 30 students at SFC.

The Robert J. McGuire Scholarship is offered by New York Mets Owner Fred Wilpon and was first brought to SFC by Vice President of Development Thomas Flood. Flood wants to bring it back for 30 incoming students, but can’t do so until the college comes up with half the funds needed.

If enough is raised to pay for a student’s pilgrimage to Assisi, they will experience a transformative journey, Religion Professor Alexandria Egler said.

“As pilgrims we allow ourselves to relinquish control and give in to the journey and the path that unfolds both physically and spiritually,” Egler told SFC Today.

Students who donate at least $1 will be given a premade letter of appreciation that they can send to anyone who works at the college. Different prizes will be handed out based on the amount a donor gives.

“The idea is that this is a Franciscan endeavor because through showing appreciation, they’re going to be able to support two students for two different things,” Hirsch said.

President Brendan J. Dugan has agreed to donate $2 for every $1 they raise.

The students have created Twitter, Facebook, Snapchat and Instagram accounts — all with the name Terrier4Terrier – to promote the fundraiser. They are composing Tweets with the hashtags #DuganDoubles, #TFT and #ScholaraDollar.

The class has also hung flyers around campus to spread the word.

Hirsch’s students will be in the cafeteria from 9 am to 5 pm on both days.