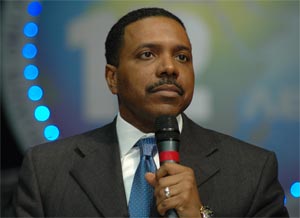 Georgia televangelist Creflo Dollar has asked his congregation to help fund what he calls “Project G650,” which would pay for a new Gulfstream G650 jet.

Dollar is the pastor of World Changers Church in Atlanta, Georgia.

He asked his 200,000-member congregation to each donate $300 dollars in order to fund the aircraft, a high-end business model that retails for $65 million.

It would be used to transport Dollar to countries around the globe in order to spread the gospel, which he has been doing since 1999.

According to the “Project G650” video that was posted on the pastor’s website, he purchased a 1984 Gulfstream jet in 1999, which no longer works.

The five minute video mentioned that the jet became permanently damaged in an accident in November 2014. The pastor has been flying commercially ever since, according to the Christian Post.

“Our current ministry plane is no longer useable we need your help,” Dollar said in the video. “I ask all of our partners globally to get on board with Project G650.”

In the video, Rick Hayes, who is the project manager of the campaign, stated, “If all of our existing partners were to sow $300 each, from all over the world, we’d be able to acquire this jet in a very, very short period of time”.

The campaign has sparked outrage since it was announced last week. Many were appalled at the hefty donation the pastor was requesting of his members.

The video was taken down from Dollar’s website on Monday. The website for the campaign has also been deactivated and donations can no longer be made.

“There is no campaign right now,” said Juda Engelmayer of 5W Public Relations, which represents Creflo Dollar ministries, according to the Christian Post.

“There is no campaign. It’s a moot point. The ministry will now focus on spreading the Gospel,” Engelmayer added.

DELANEY WORKS ON ASSISTING THE TERRIERS
NIT TOURNAMENT PREVIEW: TERRIERS TAKE ON TOP-SEEDED RICHMOND SPIDERS IN THE OPENING ROUND